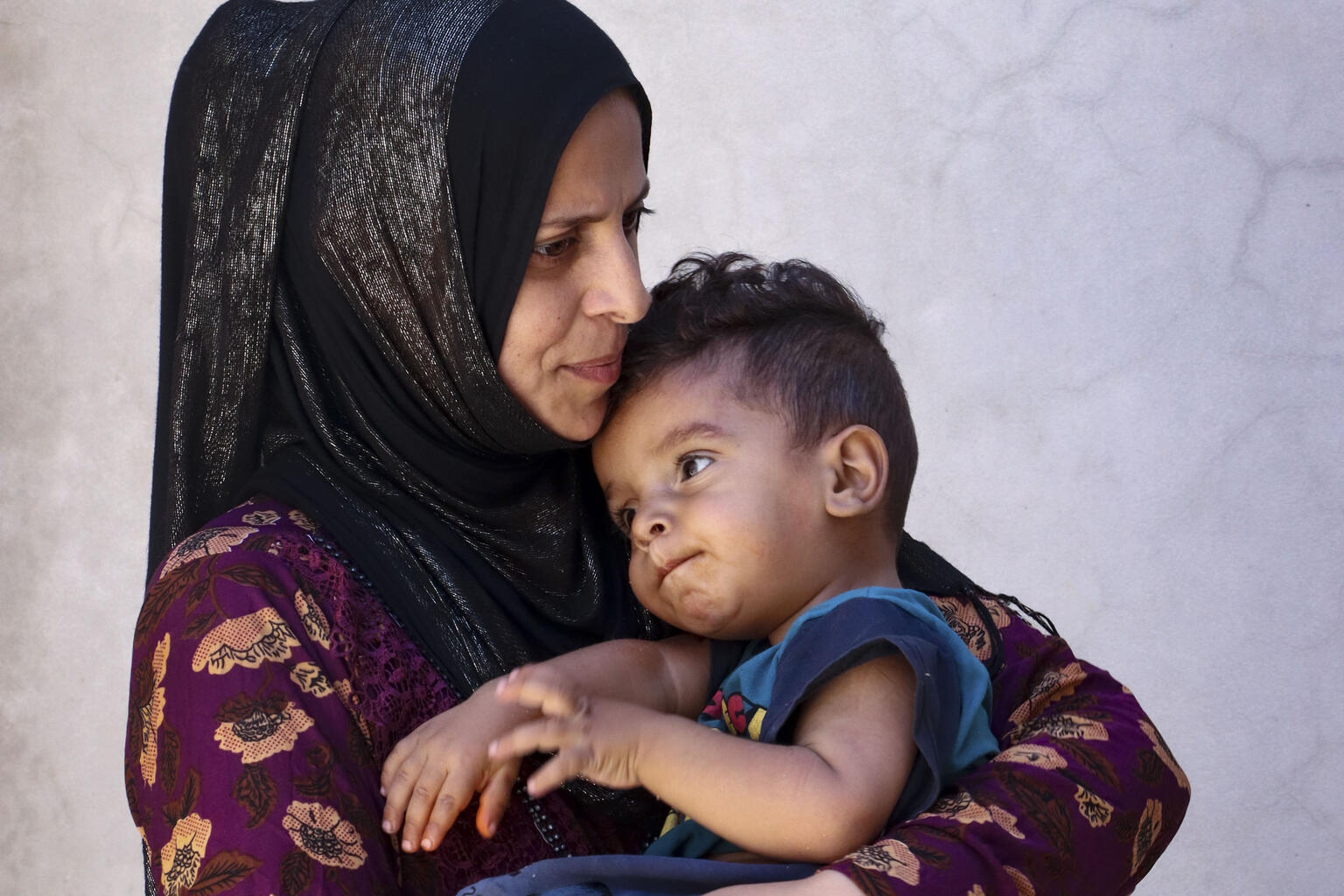 The world is grappling with simultaneous crises – escalating conflict across continents, from Sudan to Syria and Afghanistan to Ukraine, coupled with the devastating consequences of COVID-19 and climate change.

The situation is unprecedented. In 2022, 274 million people will need humanitarian assistance and protection – the highest figure in decades. Many of those in need are children. One in six children live in conflict zones, as many as 1.2 billion children are living in areas that are at high-risk of experiencing climate-related incidents and 36.5 million children were displaced from their homes at the end of 2021 – figures that are estimated to rise this year.

All of these children are at grave risk of violence – physical, sexual violence, emotional – neglect and abuse. They are at heightened risk of trafficking, especially with trafficking of girls found in almost every conflict zone in the world, of child marriage and of being recruited in to child labour, or in conflict zones, directly into armed conflict. All of these have devastating, lasting consequences on their well-being and future.

In this critical time, the global end violence community is taking action to match the scale of the issue. Which is why World Humanitarian Day 2022, with the theme of “it takes a village” is an important moment to bring together all stakeholders to advocate for the protection of people affected by crises. Action for the millions of children in humanitarian settings is a key priority – one that End Violence is addressing, supporting and advocating for from local to the global level – in diverse ways: 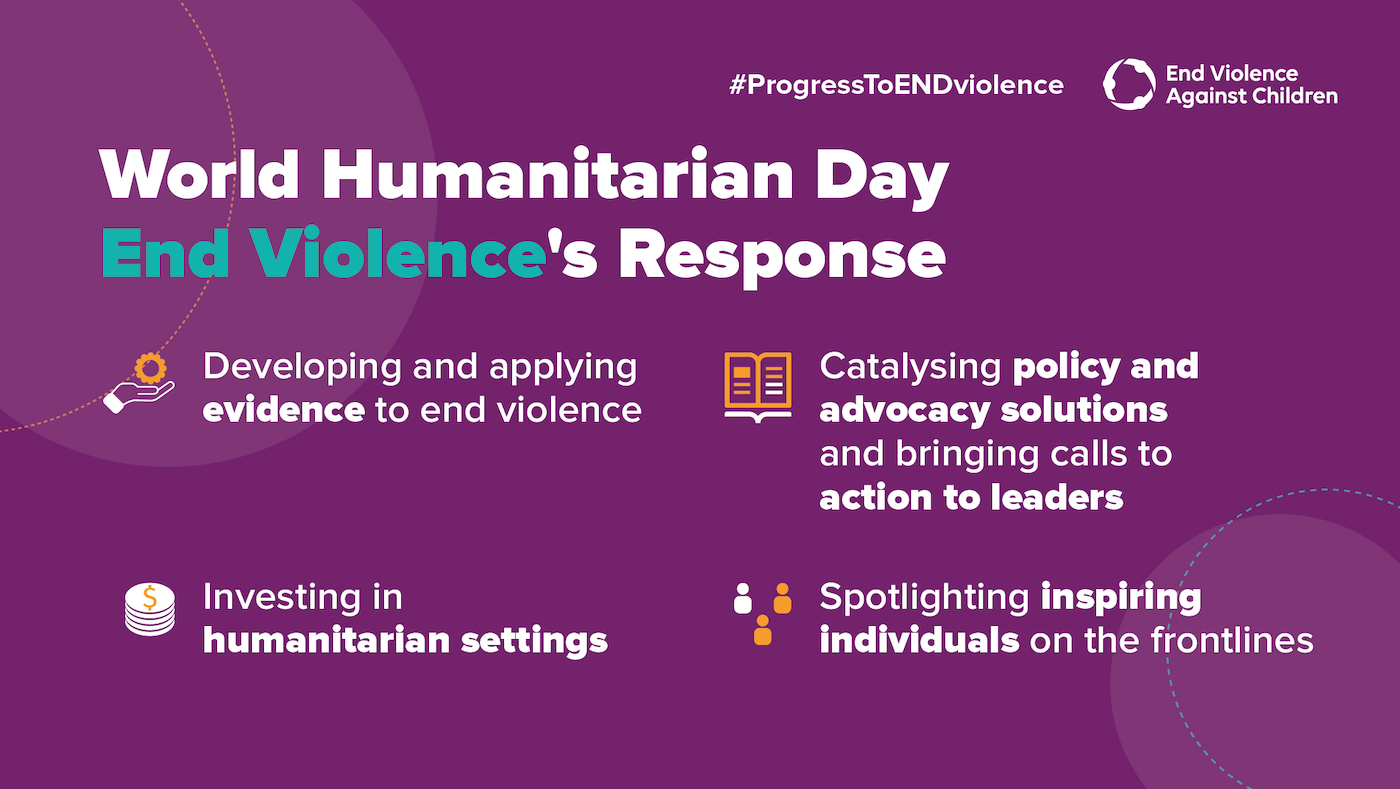 Celebrating inspiring individuals on the frontlines

Countless individuals are working on the frontlines to end violence against children, including in some of the most fragile contexts such as conflict zones. Through the Together to #ENDviolence global campaign’s Champions series and the INSPIRING ways to end violence podcast, End Violence is amplifying the crucial work and voices of these individuals.

Meet, for instance, Abdi Waber, who works as Manager of Child Protection and Child Rights Governance for Save the Children Somalia. Through our podcast, he sheds light on the devastating impacts of COVID-19 compounding the ongoing crisis in Somalia – the decade long conflict, environmental shocks and health emergencies. We spotlight the work he and his fellow colleagues are doing to protect children there.

The End Violence Lab helps build system-strengthening data and evidence infrastructure to eliminate violence against children, using INSPIRE, a set of seven evidence-based strategies. In April 2021, the Lab launched the Colombia INSPIRE Coordination Course as part of our commitment to global learning. Explore this real-time learning piece and interview with a frontline worker about applying evidence-based interventions in the Guaviare Department in the Southern central region of Colombia – riddled with continuous attacks and threats to children by armed forces, including forced recruitment.

In 2018, with generous contribution from the Government of Japan, End Violence’s first humanitarian funding window was created. The US$5.9 million contribution helped 12 organisations protect children affected by conflict in Nigeria and Uganda. In just over a year, these projects led to the release of over 1,900 children from armed groups, and the provision of psychosocial support to nearly 70,800 children and caregivers. The End Violence Fund has so far invested over US$ 77 million in 82 projects – with impact in over 70 countries.

Catalysing solutions and calls to action

End Violence is also galvanising policy action to ensure the safety of children in fragile settings. The Together to #ENDviolce policy proposal to protect children from violence in humanitarian settings calls on decision-makers to prioritise child protection in all humanitarian response plans, and urges governments and donors to ensure funding to meet the escalating protection needs of children in crisis. Through a Leaders’ Statement, 50 international leaders and over 300 organisations have endorsed our evidence-based policy proposals.

This policy call was also reinforced at the Together to #ENDviolence Leaders’ Event on 14 June, 2022, which brought together heads of state, royalty, UN leadership, children and survivors of childhood violence to catalyse political and financial commitments around a common vision of ending all forms of violence against children. David Miliband, President & CEO, International Rescue Committee spoke on the pressing need to protect children in fragile and humanitarian contexts. He called for urgent action on four fronts:

His call was echoed by those at the heart of our efforts to end violence – children themselves.

As part of a panel discussion with child activists, Horuna, President of the Parliamentary Group for the Protection of Children’s Rights in Mali called for authorities to put in place more international conventions and standards aimed at protecting children from the harming consequences of armed conflict. Watch his remarks below.

World Humanitarian Day serves as a reminder of the efforts being made by so many to protect the most vulnerable and at-risk children – as well as a motivator to learn from and build on this inspiring action at this critical time. Learn more about action to protect children from violence through End Violence’s Fund, Policy Proposals and Together to #ENDviolence campaign.