Across the world, civil society organisations, or CSOs, are working to end violence against children. Especially in areas fractured by disaster, conflict or longstanding poverty, CSOs are often the first to respond and the last to leave. They protect children, enhance their wellbeing, and bring hope and opportunity to those who need it most. CSOs can also reach into the crevices of communities, governments and institutions, sparking change and unleashing solutions at the local, national and global levels.

Ending violence against children would be impossible without the engagement of CSOs. The Civil Society Forum to End Violence Against Children (CSO Forum) was created to harness the collective power of civil society organisations to end violence against children. To date, the CSO Forum is made up of the African Child Policy Forum, Arigatou International, Child Helpline International, ChildFund Alliance, CPC Learning Network, ECPAT, Girls Not Brides, the Global Initiative to End All Corporal Punishment of Children, Internet Watch Foundation, ISPCAN, One Third Sweden, Plan International, Promundo, Save the Children, SOS Children’s Villages International, Terre des Hommes, the World Council of Churches, and World Vision.

The Forum also supports the End Violence Global Partnership to End Violence Against Children, facilitating broad-based, inclusive, effective and accountable engagement from civil society. To do so, the Forum’s efforts revolve around three main goals: build and sustain political will through advocacy, accelerate action at the country level, and collaborate and learn from one another.

Apply to become a member of the CSO Forum.

Since its inception, the CSO Forum has elevated child protection issues to the forefront of political discourse. Members of the CSO Forum join forces to hold governments accountable to commitments made in the Convention of the Rights of the Child and the Sustainable Development Goals, along with their promises to children through their national action plans.

The CSO Forum also develops joint advocacy messages at the national, regional and global level, complementing the Partnership’s engagement with national governments and building political will to end violence.

An example from Mexico

In 2017, the CSO Forum organised a convening in Mexico that gathered more than 100 organisations to discuss and present solutions to end violence against children. Alongside the convening, civil society organisations across 10 Mexican States conducted a series of child participation workshops using a common methodology over the course of two months. This culminated with a national meeting of child representatives, who drafted a proposal that was later used to create an awareness-raising campaign the next year.

The CSO Forum also helped drive the #MxporlaNiñez movement forward, which brought together more than 100 Mexican civil society organisations to promote a national dialogue around the Agenda of Childhood and Adolescence. Nine commitments – two of which were focused on ending violence against children – were put to public debate. As a result, four presidential candidates, including the president-elect, declared their public commitment to the #MxporlaNiñez movement.

An example from South Africa

In 2017, the Government of South Africa became a pathfinding country. Through that process, the government noticed their prior three-year Programme of Action was never officially launched – or implemented – and not been consulted by civil society. To address that gap, 30 representatives from civil society, government departments, international organisations and the research community gathered to better address violence against children and fragmentation within the sector. That discussion sparked the development of numerous working groups on policy mapping, implementation research, advocacy and positive parenting.

Members of the forum advocate together for legal changes, better implementation of policies, and stronger systems for child protection and meaningful participation of children. They also implement prevention and response programmes to address various forms of violence against children. In addition, members support adaptation and implementation of INSPIRE strategies within their own organisations, while sharing learnings and effective practices throughout their networks. The CSO Forum has also invested resources to elevate the voices of children, creating spaces for children to meaningfully engage with the issues that involve them.

The CSO Forum has facilitated the engagement of children within local community spaces, the Global Partnership’s 2018 Solutions Summit in Sweden, and within Voluntary National Review processes throughout the world.

An example from Indonesia

The CSO Forum encourages national organisations to join together within their countries. One example of this occurred in 2018, when the Indonesia Alliance on Ending Violence Against children – Aliansi PKTA – was launched by the Ministry of Women Empowerment and Child Protection. Ever since, the coalition has been a driving force for change in Indonesia: later that year, they developed a website and a book of good practices to end violence against children. They also ensured civil society’s activities were formally included in the National Action Plan on SDG 16.2. Aliansi PKTA has distribution information on parental guidance, online sexual violence, child marriage, child trafficking, digital literacy and more. It has also published articles in mainstream media about children who attended the End Violence Solutions Summit in Sweden.

The CSO Forum works hand-in-hand with Aliansi PKTA to spread the coalition’s reach, connect them to global networks, share information, and facilitate activities with the End Violence Partnership.

An example from Tanzania

In Tanzania, groups of CSOs are holding the government to account. One coalition of local and international organisations participated with telecommunications representatives, government and police forces of Tanzania and Zanzibar to launch a reporting portal for online child sexual abuse material. Fifty-six CSOs are monitoring the government’s implementation of the National Plan of Action to End Violence Against Children and Women. And throughout the country, nearly 50 CSOs have been trained to work with their local government authorities to advocate for child-friendly budgeting, including an increased allocation of resources toward protecting children from violence.

Members of the CSO Forum exchange information, discuss solutions, and challenge one another on the most effective ways to prevent and respond to violence against children. They also conduct joint evaluations of interventions, and work through their shared experiences to explore what works for children and families. By sharing and exchanging evidence-proven strategies, resources and methodologies, CSOs engaged in the forum are becoming more effective.

The CSO Forum convenes bi-weekly member calls to strategise their work, discuss next steps and better leverage the impact of civil society. Key meetings are also convened to facilitate collaboration with the End Violence Secretariat, elevating the experiences and learning from national and regional CSOs.

The Forum also works with the Partnership on key projects to end all forms of violence against children, including the 2018 End Violence Solutions Summit, the 2019 High-Level Political Forum at the United Nations, and the ongoing Safe to Learn campaign.

An example from the Philippines

The Civil Society Coalition on the Convention on the Rights of the Child (CSC-CRC), an alliance of 19 local and international child rights organisations in collaboration with Social Watch Philippines, is conducting a baseline study of public investment for child protection systems in 2018. The study contributed to benchmarking and identifying indicators for measuring budgeting principles for child rights. These indicators are facilitating future studies on the effectiveness, efficiency, equity, transparency and sustainability of public investment in children, and also identifies gaps and provides recommendations to better publicly invest in children.

An example from Romania

In Romania, the Federation of NGOs for Child Protection (FONPC) – a coalition of 73 CSOs – actively disseminated information about ending violence against children, the End Violence Global Partnership, and the CSO Forum to push Romania to become pathfinding. To do so, they used television, press and social media, and also convened a national conference with central and local authorities, civil society, the University of Bucharest, private companies, children and youth themselves. This conference was uploaded to Facebook and reached over 2,300 people; news about the conference also appeared in online media from the Social Assistance General Directorate.

In addition, a brief video from the conference was created by the students from the Faculty of Sociology and Social Work, University of Bucharest. FONPC them mobilised its members to help the government conduct the self-assessment required as part of the pathfinding process.

A working group was initiated between FONPC, the National Authority for Child Rights Protection and Adoption (NACRPA), UNICEF, the Ministry of Health, the Ministry of Education, the Ministry of Justice, the Ministry of Internal Affairs and the National Agency for Equal Opportunities. Three workshops discussed, inter alia, how the group could influence public policies to end violence against children; it was agreed to establish a National Coordination Platform in the field of child protection against all forms of violence and to develop a joint Action Plan to be adopted by the NACRPA and/or by the whole government.

The Civil Society Organisation Forum is hosting three upcoming webinars, aimed to help CSOs engage in the voluntary national review process through collective actions. These webinars will be hosted in three different time zones and adapted to specific regions: Africa, the Middle East, Europe and North America; Latin America and the Caribbean; and Asia and Southeast Asia. The events will include:

The Civil Society Organisation Forum to End Violence Against Children collaborated with End Violence to host regional webinars. These webinars will bring civil society groups from different Pathfinding Countries together, giving them the platform to share information and learn from one another, while also exploring challenges and opportunities around Sustainable Development Goal 16.2.

In 2020, the COS Forum hosted multiple events, including:

ECPAT and Save the Children led a webinar to strengthen collaboration and learning among civil society organisation networks at the national, regional and global levels to end violence against children. Through this event, participants were given the opportunity to share experiences and learn from others, with a particular focus on joint advocacy initiatives to end violence against children. They also discussed better ways of working with and through both the End Violence Partnership and the CSO Forum.

World Vision and ChildFund Alliance led a Spanish language webinar to complement the one listed above. This event had the same objectives, including strengthening collaboration and learning among civil society organisation networks at the national, regional and global levels to end violence against children.

In this webinar, Arigatou, ISPCAN and Plan International spoke about collective actions taken by civil society organisations at the national and regional levels. Objectives for this event included discussing opportunities to strengthen coordination at national levels; how to engage with other stakeholders, including at regional and global levels; identifying specific needs for capacity development and information sharing; and strengthening the role of CSO coalitions and groups in supporting the goals of End Violence.

Arigatou, SOS Children's Villages and Plan International led a Spanish language webinar to complement the one listed above. Objectives for this event included discussing opportunities to strengthen coordination at national levels; how to engage with other stakeholders, including at regional and global levels; identifying specific needs for capacity development and information sharing; and strengthening the role of CSO coalitions and groups in supporting the goals of End Violence. 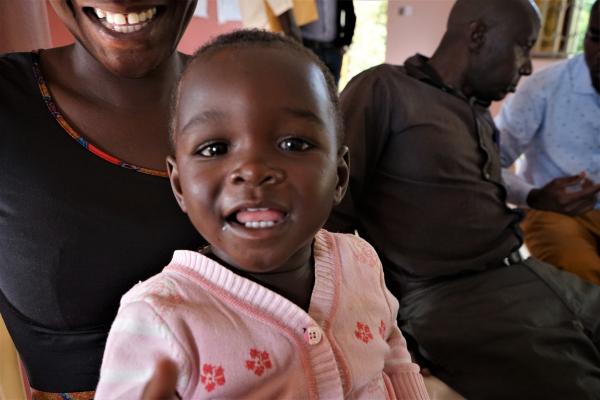 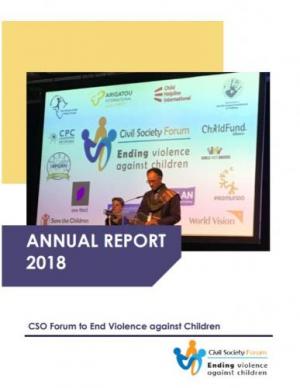 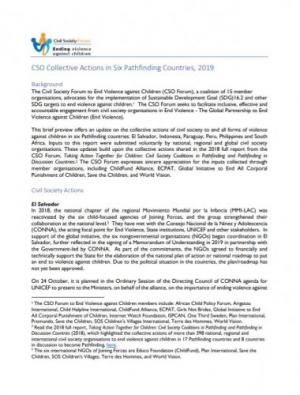 Collective Actions in Pathfinding Countries
Read more about what CSOs are doing together in pathfinding countries. 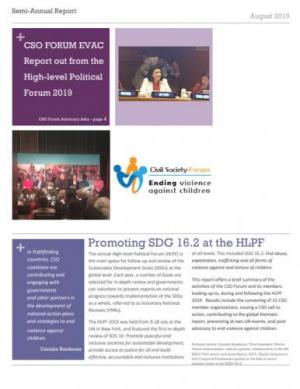 HLPF Report and Advocacy Asks
Read about the CSO Forum's activities during the 2019 High-Level Political Forum. 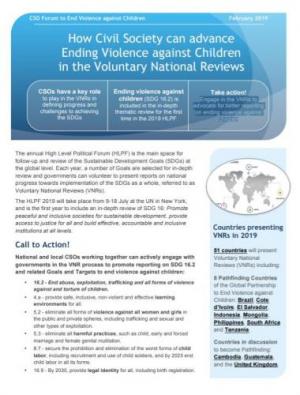