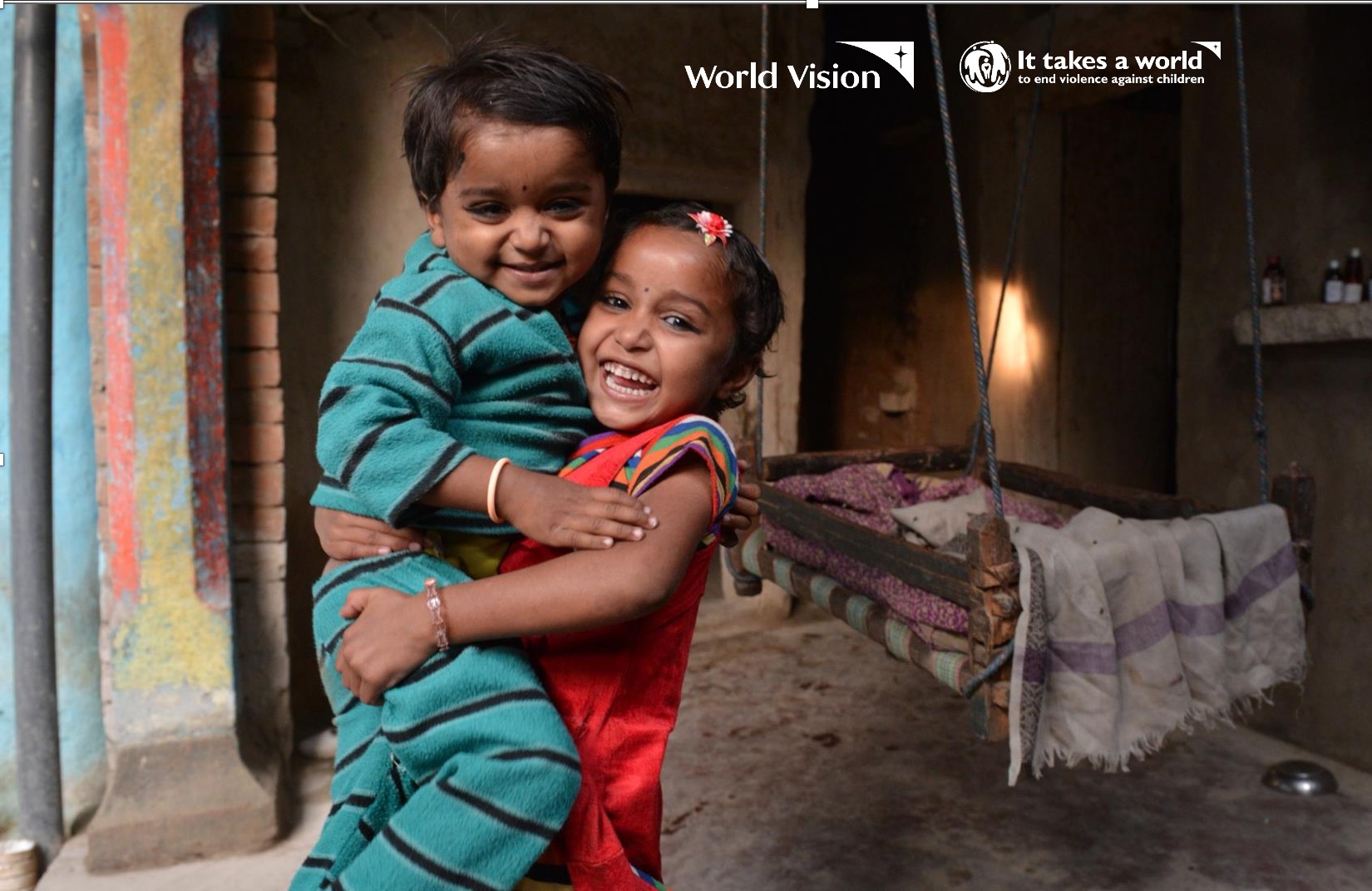 Violence against children is a complex, global issue. It takes on many forms and occurs in many contexts, in every country of the world. Addressing it requires us all to come together – every government and all stakeholders in children’s lives.

For the last five years, World Vision’s 'It takes a world' to end violence against children global campaign has brought together children alongside national and international communities across 87 countries, seeking to build a world where no child has to live in fear of violence.

The End Violence Partner organisation is a Christian relief, development and advocacy organisation dedicated to helping children reach their full potential by tackling the root causes of poverty and injustice. 'It takes a world'  is the organisation’s largest ever campaign, working with governments, faith leaders, children and their communities.The campaign has impacted the lives of 268 million children, making 265 significant contributions to policy or policies related to violence against children.

End Violence spoke to the professionals behind the campaign about the roles of the various actors, how the organisation continued to innovate and deliver through unfolding crises and how it achieved impact.

Can you tell us about the mission of the 'It takes a world' Campaign – what did it set out to achieve and how?

The ‘It takes a world’ to end violence against children campaign is World Vision’s largest global campaign to date, with 87 participating countries. It seeks to build a world where no child has to live in fear of violence – a bold expression of World Vision's intent to promote human transformation, seek justice, uphold the right of children to be protected and take action in defense of the most vulnerable children.

Let’s begin with where the campaign is today. What has the impact been so far?

The campaign has impacted the lives of 268 million children. In 2021 alone, over 804,000 children and young people meaningfully participated in the campaign and supporters joined together to take over 2 million advocacy actions. This collective effort has led to 265 significant contributions to policy or policies related to violence against children. Of this, 65 were related to allocating, increasing or defending government funding to address ending violence against children.

Let’s delve into how this was achieved. Could you tell us about the role that children, faith leaders and faith communities played?

Five years into the It takes a world campaign, we are seeing positive gains towards ending violence against children thanks to the tireless efforts of children and young leaders, faith leaders and faith communities.

Working with children and young people around the globe, World Vision launched the ‘Digital Platform Project’ to ensure that children are equipped with the digital tools needed to participate actively and safely in advocacy initiatives. Children and young people have also participated in a wide array of global virtual events, conferences, and podcasts to make their voices heard in the effort to end violence.

We are engaging with faith leaders from different religious backgrounds to prioritise the protection of children and model change in the community. World Vision-supported ‘Community Hope Action Teams’ are taking action with faith leaders that are innovative, situation-specific, creative, and dynamic. This could mean referring to religious texts when discussing child protection issues or establishing funds to support the most vulnerable children.

World Vision also works with diverse partners. Could you talk about some of this work?

Some examples of work with Partners include

Measuring progress:
A coordinated effort between World Vision and its partners has influenced national governments to pay more attention to issues related to violence against children through the Sustainable Development Goals Voluntary National Review process. The reviews are a vital method of measuring a nation’s progress towards achieving the UN’s Sustainable Development Goals (SDGs).

Measuring global aid:
World Vision and a coalition of partners, including End Violence, have released a series of the Counting Pennies reports. These reports reflect the state of donor investment to end violence against children and provide recommendations for how donors can prioritise the issue to close the funding gap and fund evidence-based programmes working to end violence.

Since the 2017 launch of the campaign, the external context has changed drastically, with multiple crises putting children at heightened risk of violence. How has this affected the work of the campaign?

It has been a challenging journey, not least with COVID-19 restrictions, lockdowns, and school closures that continue to put up to 85 million girls and boys at greater risk of violence. Other global crises such as climate change, armed conflict, and humanitarian emergencies only made the situation worse and increasingly complex.

But throughout this, the efforts of the campaign have empowered children and young people to raise their voices and be heard on the global stage, even when physical lockdown restricted other measures. This was done by using digital platforms and online tools to mobilise supporters to draw global attention to issues related to violence against children and influence those in power to take action. Our efforts also focused on ensuring commitments made toward Sustainable Development Goals by governments and donors contribute towards ending violence against children and that action to end violence also contribute to the achievement of the 2030 Agenda.

What did World Vision learn and did it change anything internally?

We are learning and innovating how we campaign to create lasting impact – through better use of data, becoming a leading voice for children, and focusing on social behaviour change. World Vision has launched the National End Violence Against Children Policy Dashboard to strengthen its evidence footprint on policy gaps and successes to end violence against children.

A ‘Social Listening' approach is being piloted to understand and contribute as a leading voice for children. It involves analysing trending conversations (on social media and so on)  related to violence against children. Most of all, we are committed to listening and acting with children and young people. They are our hope for a better tomorrow.

You can learn more about World Vision and its 'It takes a world' campaign here, and read more in-depth about how change is being driven on the ground within countries through this profile of World Vision Zambia.