On 11 October 2022, we commemorate the 10th anniversary of the International Day of the Girl Child, marking a global moment to promote the rights and empowerment of girls around the world.

This day presents an opportunity to take stock of the challenges that girls face, celebrate their progress and spotlight their important calls for action.

Among the most critical issues faced by today’s girls is gender-based violence. Women and girls are disproportionately subjected to many forms of violence, including femicide, sexual violence, intimate partner violence, trafficking and child marriages.

Gender-based violence exists in every country across the world, and the devastating impact on the rights, development, dignity and futures of countless girls often lasts a lifetime. Discriminatory social norms for how girls and women ‘should’ behave in societies have been a key driver of many forms of violence.

Governments, policymakers and the general public have a responsibility to do more to empower and protect all girls, wherever they may be. This includes investing in programmes and approaches that address the root causes of violence and discrimination and ensuring girls’ perspectives are at the centre of our responses. On this day, we are placing girls and young women front and centre – amplifying their voices and solutions to the international community to support change for and with girls.

Meet some of the inspiring girls bringing about change as #ENDviolence Advocates & Champions whose dedicated, courageous efforts are driving change to end violence at home, in schools, online and in their communities.

Dola, a child activist from Bangladesh and a bold End Violence Advocate is using her voice to speak truth to power. Dola took the stage at the Together to #ENDviolence Leaders’ Event and spoke alongside heads of state, children, UN leadership, royalty, CEOs, adult survivors of childhood violence and participants from 140+ countries. On behalf of all children, she shared their perspectives, their solutions and their calls to action with global leaders 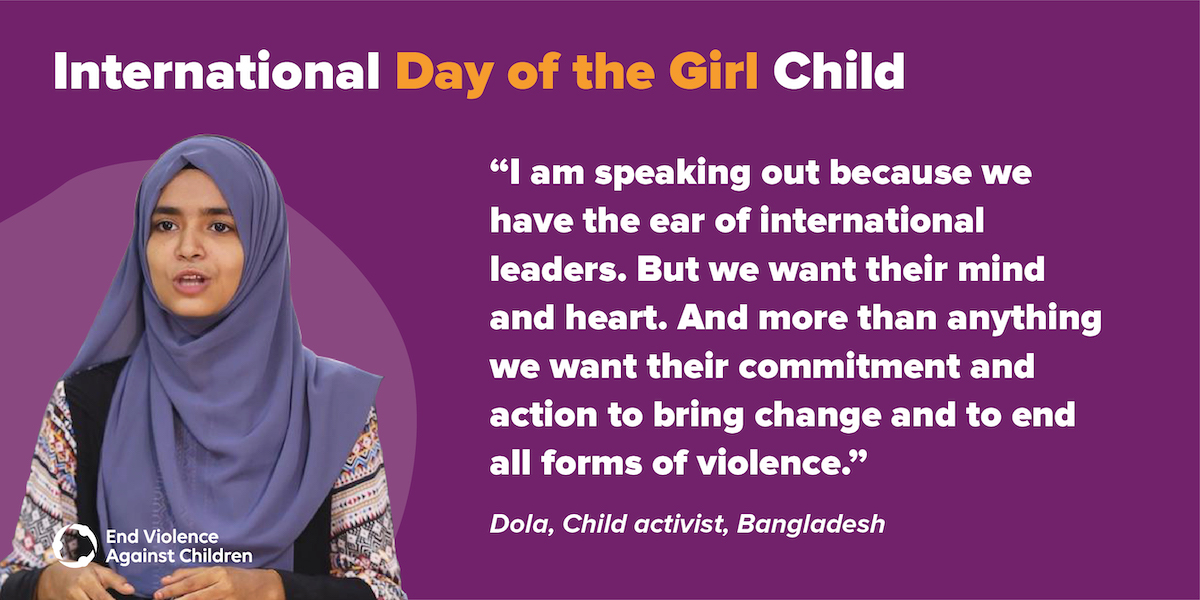 Gitanjali Rao, Innovator and TIME Kid of the Year is a young End Violence Advocate demanding for young people to be part of the solutions to issues they face. She is working to make online spaces safe and secure for children and has developed an app that works to combat cyberbullying.

“We need solutions for teenagers, by teenagers.
- Gitanjali

Josephine is an activist and a survivor of childhood sexual violence from Sierra Leone. She is speaking out about sexual violence in and through school, her own struggle with it and her commitment to make schools safe to learn. Along with End Violence and three other young people, she co-produced a new creative film titled ‘Don’t Fail Us’ to demand action from world leaders to end violence and transform education systems. End Violence brought their voices to the global stage and launched the film on the margins of the UN Secretary-General’s Transforming Education Summit.

Josephine is calling for urgent action to make education safe for all girls and for investment in teacher training. 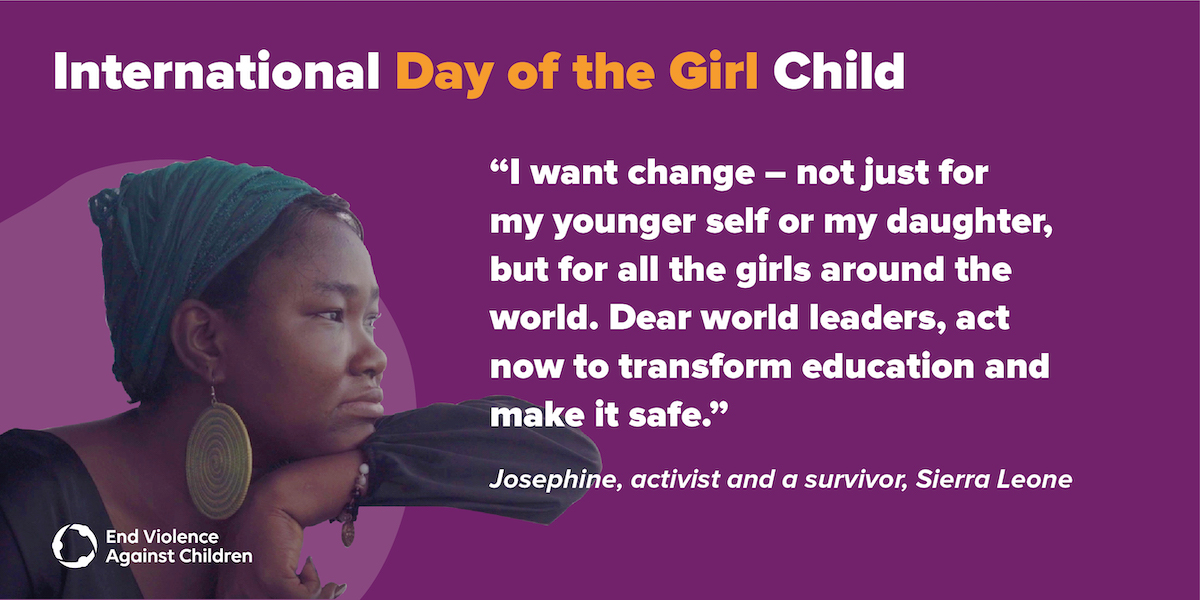 As part of the Safe to Learn youth-led films being brought to the global agenda, Giang, a young activist from Viet Nam, speaks about their experience of mental health issues, eating disorders, verbal abuse and isolation from peers, and lack of adequate support from school teachers. They are calling for increased support for mental health in the school system and an end to stigma and discrimination. Watch their story.

“I want to see schools where mental health issues are looked at just as any other physical challenges. And there will no longer be barriers, stigma or discrimination to stop us.”
- Giang

Erika, a changemaker and End Violence Champion from the Philippines, has put her community first since the age of 4. Growing up in an informal settlement community in Quezon City, Philippines and witnessing the challenges faced by children around her, she became an active leader in educational initiatives, a member of the National Anti-Poverty Commission at the age of 12, and spoken at multiple international fora, on an array of issues including corporal punishment. Read about her journey.

"If children know about their rights, they will have the knowledge to participate in larger dialogues and speak up about the issues facing them."
- Erika

End Violence Champion Ayesha Hammam, the founder of Lift Africa, is speaking out as a champion for girls in Nigeria. At 14, she stood at the threshold of child marriage, she decided to fight for change for herself and her peers. She is working to transform mindsets of communities and bring out legal change to end sexual violence and child marriage.

“We need to create societies where people who experience sexual violence can come forward safely.”
- Ayesha

Meet Sarafina, a World Vision Young Leader who has become an outspoken activist against child marriage, violence against women, and other forms of abuse and exploitation. After witnessing violence at home and within her community, she is working to bring real, sustainable change across Ghana.

“Unless we speak up, adults will never understand our problems.”
- Sarafina

An inspiring panel of young girl activists also spoke up at the Together to #ENDviolence Spotlight Session at the 2022 Global Forum for Children and Youth, and brought out the perspectives, impact, and calls to action of children making a difference across communities. From Uganda and Kenya to Yemen and India, they highlighted the wide range of issues that networks of children are working to address, including child sexual abuse, child marriage, and violence in conflict settings. Watch the session.

These inspiring women from around the world are at the heart of the movement for change. The End Violence Partnership will continue to support and amplify their voices for the protection and well-being of girls across the world.