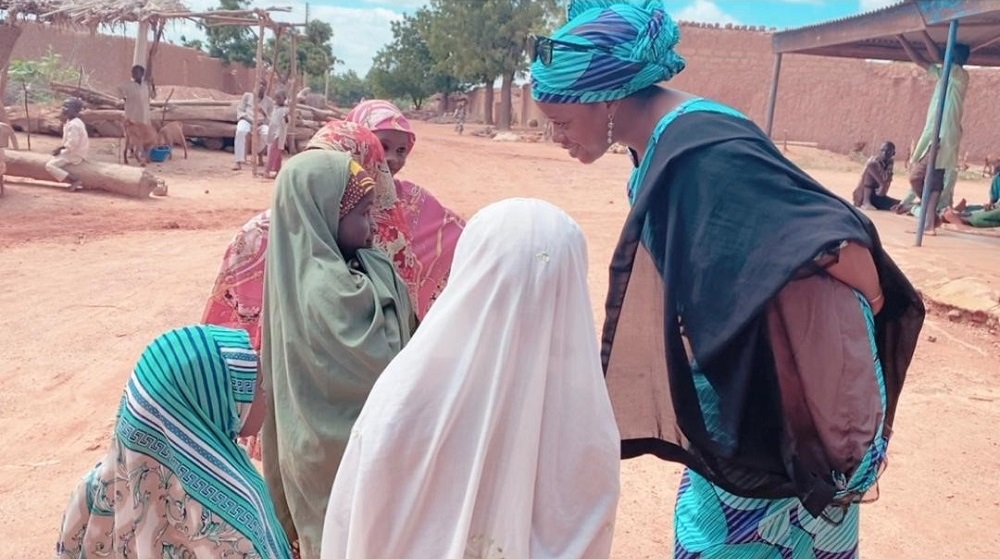 At the age of 14, Aysha Hamman’s future hung on the precipice of change: if all went according to plan, she would get married instead of continuing her education. Luckily for Hamman, however, her mother refused to let her opportunities be cut short. Having been a child bride herself, Hamman’s mother knew the power of education – and that if given the chance, girls could go on to change the world.

In the years since, Hamman has done exactly that. First as a lawyer within the Nigerian Ministry of Justice, now as the founder of her own non-profit organization, Hamman has helped countless young girls northern Nigeria continue their education, using her legal skills to secure justice for those experiencing sexual assault, gender-based violence and child marriage. As our latest End Violence Champion, Hamman shared her experiences growing up in northeastern Nigeria – and how her background in law has helped her protect girls across the region.

Why did you become interested in human rights and gender equality?

I grew up in northern Nigeria – a part of the world where girls’ education is rarely taken seriously. The norm, especially in rural communities, is that the moment you experience your first menstrual cycle, you are expected to get married. Often, you could be married to a much older man. My mother had no formal education and was married to my father at the age of 15. By the time he passed away when I was 5, my mom was 26 and he was 54.

When my father passed away, I went to live with my uncles. Less than 10 years later – when I was 14 and in secondary school – the expectation was to get married. But my mother knew I wanted more; I wanted to go to school, break barriers and shatter the glass ceiling for girls. She wouldn’t stand for me stopping my education. My mother wanted me to have the opportunities that she couldn’t have, especially because I was a bright kid and a good student. So, we left. I continued my education, became a lawyer, and eventually, began working with the Nigerian Ministry of Justice. I am the first and only female lawyer in my lineage.

At first, my uncles didn’t understand our decision and why I wanted to take a path different from our culture. Eventually, though, they began to understand. We’re okay with each other now.

My first day in the courtroom, I met children – mostly girls – who had been raped, abused and violated. That would happen every day in court, especially young girls being raped by older men. One of the first cases I worked on was a case of a 6-month-old baby who was raped in Adamawa State. It was all over the news; it got a lot of attention. We ended up sending the baby’s abuser to life in jail. All of that made me interested in protecting the rights of girls and women.

How did your work in law lead you to developing Lift Africa?

The more I saw women and girls who had experienced sexual violence, rape and assault, the more I realized how difficult it was for them to come forward. I tried to create safe spaces with my clients and open up ways for people to come to me anonymously if they wanted to. In Nigeria like the rest of the world, there’s a huge fear of stigmatization – most of the time, people don’t want others to know that they were victims of rape. There are so many that are not able to speak up.

Though I would encourage clients to go to court, it was very difficult. There’s a fear that if a girl comes forward about rape, no one would want to marry them, and it would be very difficult for them to get by in their communities. Even if you encourage a victim to report and you’re in the process of trying to get justice for them in court, they can withdraw because they are intimidated by their abusers. That was very discouraging and frustrating.

I started wondering if there was anything I could do to help more. What if I could do something to identify people and support them – instead of helping only those that come to the Ministry of Justice for a lawyer? There is a need for advocacy, for education. In 2018, I founded Lift Africa in the hope that I could help more people understand the impact of rape and sexual violence and provide legal support if they needed it.

Since then, we’ve expanded to other areas as well. Violence can often happen because of vulnerability, and in many northern areas, we are seeing girls’ exposure to violence rise for different reasons. Our first project was called From Streets to Classrooms, targeting girls who had dropped out of school and engaged in street hawking, a practice that makes them vulnerable to many dangers. Through that project, we helped send 2,300 children – mostly girls – back to school through scholarships with our partners. We also try to reduce vulnerability to violence in other ways, specifically among dispersed populations in northeastern Nigeria.

We empower women through food security projects, raise awareness of the issues of sexual violence, and create safe spaces where girls can talk about their experiences. We also have a sexual assault referral hotline, where we work with traditional and religious leaders to identify cases and refer them to services, including legal support and rape kits via police officers.

These programmes – along with our pro bono legal support – run out of our office in Abuja. We have eight staff members and four lawyers. 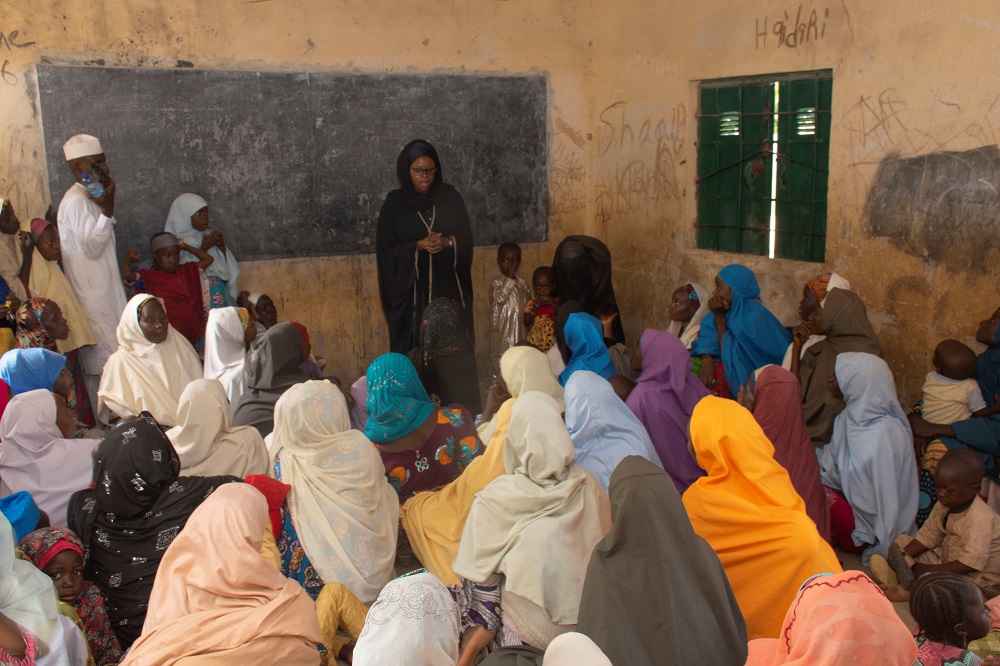 Rape and sexual assault, as you’ve mentioned, is a very sensitive topic. How do you get communities to work with you on these issues?

At first, it was very challenging because we were coming as strangers. The first time we held an advocacy meeting about the importance of sending girls to school, we were quite literally chased out of a village in Adamawa State. Young men almost beat us up on our way out. The community didn’t like what we were saying; they thought it was against their culture. We knew we needed to try a different approach.

We finally connected with a member of the royal family in Nigeria. He held a lot of prestige within the community. He spoke with those he knew in the villages we were approaching, connecting with religious leaders, traditional leaders, women and youth groups. Because of that, we began getting an audience with community leaders and told them what we wanted to do, why we wanted to do it, and why we needed their help. That changed a lot for us.

What do you think it will take to end sexual violence for good?

The first thing we need to do is create a culture that supports victims and survivors. One in four girls and one in 10 boys experience sexual violence before the age of 18. So many of those who experience violence never tell anyone about it – the main reasons being because of fear, retaliation, shame and stigmatization. We need to create societies where people who experience sexual violence can come forward safely. We also have to talk to children about consent, and the difference between appropriate and inappropriate touching. 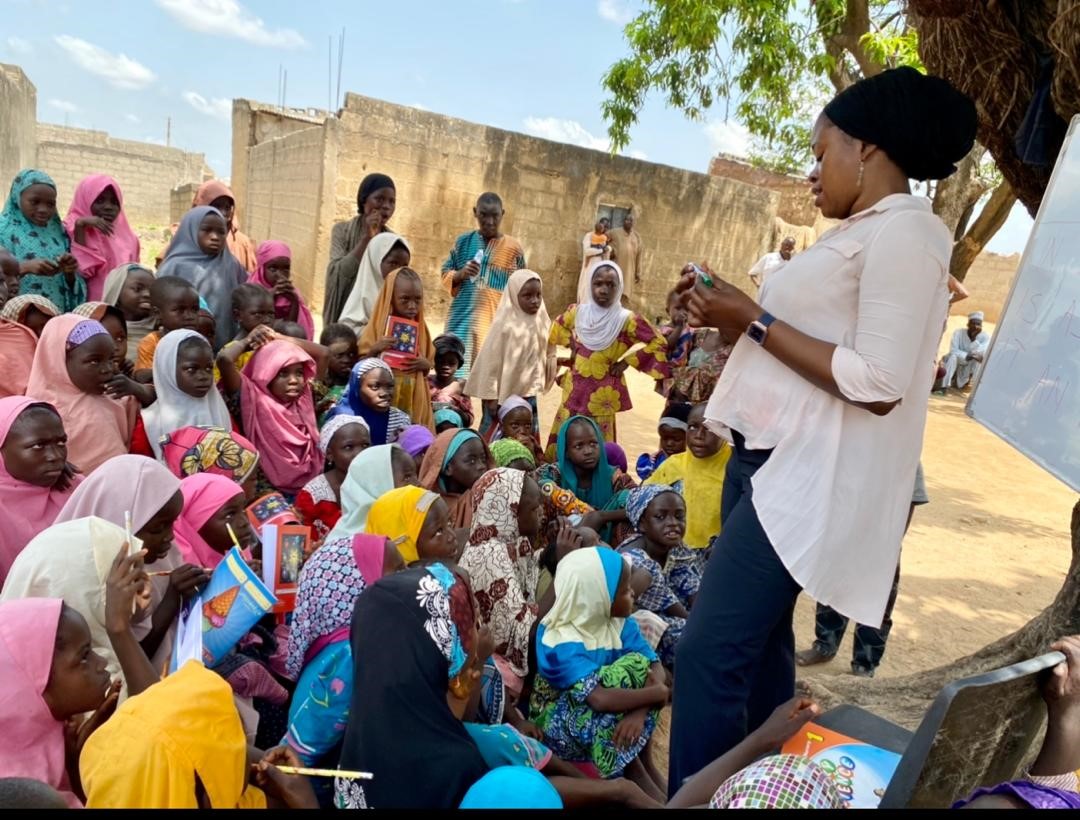