Nigeria became a pathfinder country in February of 2017, when it made a formal, public commitment to end all forms of violence against children. Nigeria has worked to protect children on multiple levels, and has used support from the End Violence Fund to protect children in the country's conflict zones. The End Violence Fund is also supporting organisations throughout Nigeria that are helping children affected by conflict, including the International Rescue Committee, the Mine Advisory Group, Street Child, Terre des Hommes and UNICEF Nigeria.

The Child’s Right Act is passed.

Ending Violence Against Children in Nigeria – Priority Actions is published. The paper was developed by a high-level technical working group comprised of government agencies, civil society and faith-based organizations.

The findings of the Drivers of Violence Against Children Study and different assessments of public investment also utilized within the technical working groups. Children and adolescents are being consulted in National Action Plan revision process.

In 2014, Nigeria became the first country in West Africa to undertake a survey on violence against children. Led by the National Population Commission of the Federal Government of Nigeria, the survey received technical support from the Centers for Disease Control and UNICEF. It consisted of a cross-sectional household survey of females and males aged 13–24, and was designed to produce national-level estimates of experiences of violence.

The Ministry of Women Affairs and Social Development is leading the expansion of child protection information management systems in both development and emergency contexts, producing regular data on providing services to victims of violence against children. The Summary Report of Nigeria’s violence against children study was released in September 2015, with a full report launched in February 2016. The summary report assessed levels of physical, sexual, and emotional violence against girls and boys, whether children are seeking services, and the consequences of childhood violence.

Nigeria has completed several rounds of the Multi-Indicator Cluster Survey, most recently MICS5 in 2017.

A recent study on the drivers of violence against children in Nigeria identified data to understand why violence occurs and what can be done to prevent it, providing key recommendations to inform the development of a national plan of action and a national strategy to change social norms.

The Road Map for Ending Violence Against Children includes a commitment to develop a comprehensive national action plan. Seven federal states have also launched their own campaigns to end violence against children, and have developed similar priority actions.

(a) implementing laws and policies to prevent and respond to violence;

(b) escalating efforts to prevent violence and enhancing the response to violence;

(d) improving research, monitoring and evaluation on violence against children; and

Ending Violence Against Children in Nigeria – Priority Actions is a key document that identifies the main partners and actions to undertake within each strategy. Recognizing that the priority actions do not contain budget allocations, a time frame or a monitoring and evaluation framework, the government of Nigeria has committed to developing a national action plan, which will be released in 2019. The plan will be based on the results of the study on the drivers of violence against children, which specifically identified gaps in interventions in parents and caregivers support strategies, social norms and life skills programs as well as documentation and evaluation of programs.

The development of a new action plan could provide an opportunity to have a more comprehensive approach to prevention, working across different ministries, institution and sectors and ensuring that all future interventions are evidence-based.

In 2019, End Violence and our partners are working to: 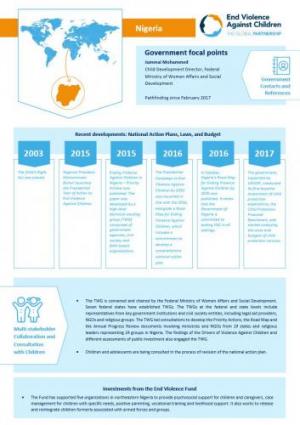 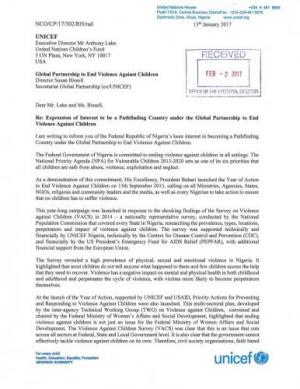 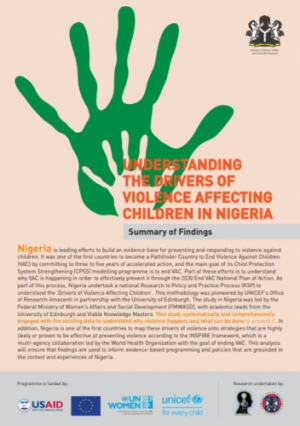 Study: Understanding the Drivers of Violence Affecting Children in Nigeria 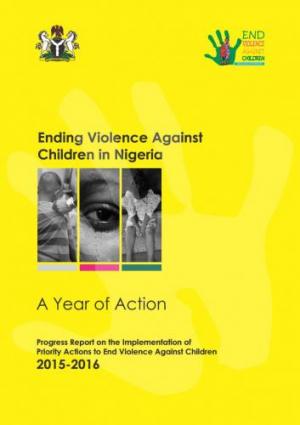