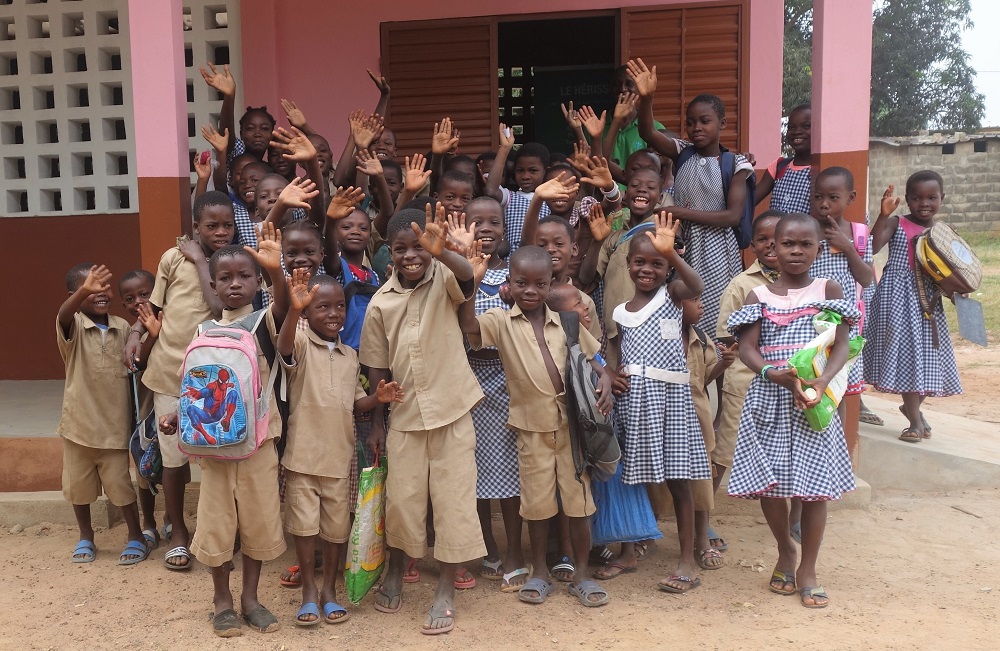 Across the world, two in three young people fear for their safety in the classroom. Violence in schools comes in many different forms, from corporal punishment to armed attacks to bullying to sex for grades. No matter the type, violence in and around schools can leave a lasting mark on children, impacting their grades, following them into adulthood, and threatening their ability to become productive adults.

For the last 15 years, Graines de Paix has worked to change this situation for children in Benin, Cote d’Ivoire, France, and Switzerland. The organisation’s mission is to develop – and implement – educational solutions to build sustainable peace. To do so, Graines de Paix creates training programmes, develops educational resources, for Ministries of Education, teachers and students. They also hold workshops for those involved in the school system, merging education pedagogies with psychosocial skills training and violence-prevention programming. Importantly, Graines de Paix's approach includes the creation of national and regional programmes that infuse a culture of peace within education systems.

As End Violence’s Partner of the Month, we explore the ways Graines de Paix has built peace among schools in two very different countries: Cote d’Ivoire and Switzerland. Read this story in French.

Though the Ivorian Government banned corporal punishment against children in 2009, violence in schools remains widespread: more than 7 out of 10 students – 3.3 million children – still experience physical violence in schools, and one in six students have been victims of sexual aggression or rape at the hands of their teachers. On top of that, nearly 60 per cent of teachers admit to regularly using physical violence against their primary school students.

To address this urgent need, Cote d’Ivoire became a Pathfinding Country in 2018, joining governments across the world in committing to ending violence against children through policy and programming.  As part of that commitment, the country established a five-year plan of action to reduce violence – but unfortunately, only a select number of interventions in that plan have been formally evaluated, and only one such intervention has reported results.

From 2012 to 2017, Graines de Paix delivered this programme to 320 “teacher counsellors” through four-day training workshops. These teacher counsellors then delivered two-day trainings – and provided individual observations and feedback sessions – ultimately reaching 24,000 pre-school and primary teachers. Throughout the process, teacher counsellors and teachers were provided with practical classroom tools and guidance to transition their teaching styles from an authoritative disciplinary approach to one that is non-violent and nurturing.

In 2017, Graines de Paix teamed up with the London School of Hygiene and Tropical Medicine and consultants from Université Félix Houphouët-Boigny d’Abidjan to evaluate APEV and assess its outcomes. The study focused on the western region of Tonkpi, where APEV had reached 1,600 primary and preschool teachers.

Through qualitative surveys, interviews and focus group discussions, Graines de Paix followed 160 teachers from 60 different schools before, during and after they participated in the programme. The results of the study showed that participating in APEV affects how teachers think and feel about violence and authority. The results also showed that the programme is an effective strategy to reduce teachers’ use of violence against primary school students.

"I am really satisfied with the Graines de Paix training,” said a teacher interviewed in the study. “With the practice of non-violence in school, we see that the attendance rate has increased. That is satisfying.”

Nearly 3,000 miles away, Graines de Paix is also working to end violence against children in Switzerland. After adapting their West African programming to fit a Swiss context, the organisation began implementing Grandir en Paix – Growing Up in Peace – to build violence prevention skills for teachers and students alike. Like its West African sister project, Grandir en Paix aims to foster a culture of peace to prevent violence in and around the classroom, and to do so, the programme focused on developing psychosocial skills for students and improving relevant soft skills for teachers.

Through the development of specific pedagogical tools, the programme helps guide teachers to support and protect children. These manuals are now integrated into Switzerland’s French-speaking national education plan.

Among other regions, Grandir en Paix was implemented and evaluated in Bex, a Swiss municipality in the Alps. The Haute Ecole Pédagogique du Valais (HEPVS), a nearby teacher training college, evaluated the programme’s impact in a school with a great number of students from migrant and low-income families. After assessing nine classes of children aged 4 to 8 for an entire school year, HEPVS found that the project reinforced the development of a positive school climate and increased psychosocial skills of students.

Today, the manuals created by the Grandir en Paix programme are accredited with the national school system, enabling schools to use their internal budgets to purchase the programme and use it as a teaching tool. To respond to the demand for psychosocial skills training, Graines de Paix continues to offer competency-building programmes for teachers across the country.

Graines de Paix's approach is also being extended to secondary schools in Switzerland. To enable this reach, the organisation is developing a secondary school guide to prevent violence, which calls for all school actors – including teachers, staff and other personnel – to be engaged. This programme will work to develop a healthy school climate by reinforcing positive leadership from teachers and other staff members.

EVALUATION: Read the evaluation report of the Grandir en Paix programme in Switzerland. 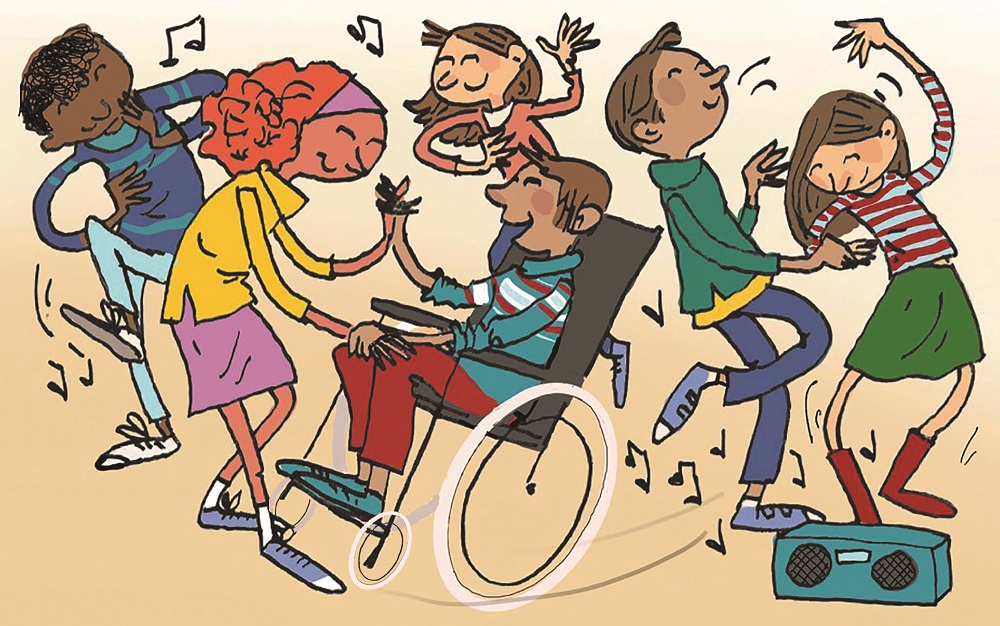 An illustration from one of Graine de Paix's education tools.

Back to knowledge platform 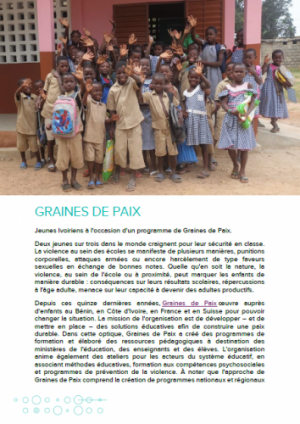 Read this story in French 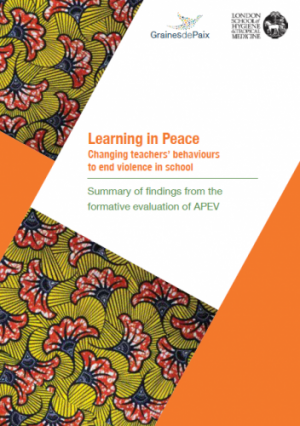 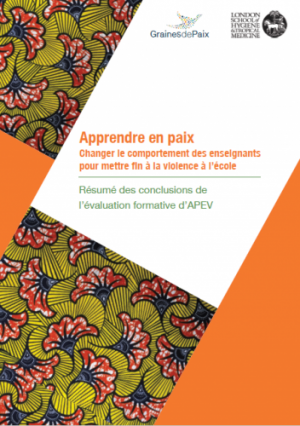 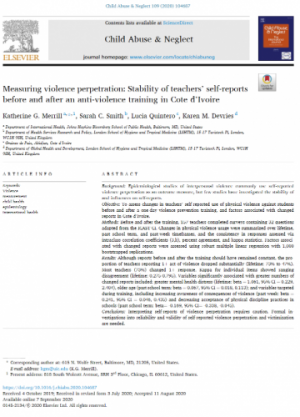 Measuring violence perpetration: Stability of teachers’ self-reports before and after an anti-violence training in Cote d’Ivoire 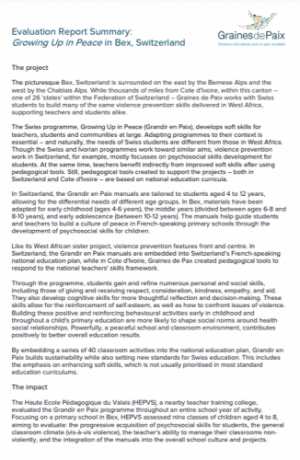 Evaluation Report Summary: Growing Up in Peace in Bex, Switzerland