Romania became a pathfinding country in November of 2016. Ever since, they have garnered support from local civil society organisations, international agencies, and those within the government itself, working together to put an end to violence against children. Romania is also supported by the End Violence Fund, and is one of 10 priority countries reached by a regional project led by the Council of Europe. This project is strengthening legislative frameworks and boosting national capacity to prevent and respond to online child sexual abuse and exploitation.

Gabriela Coman
President, National Authority for the Protection of the Rights of the Child and Adoption (NAPRCA)

The Law on the Protection and Promotion of the Rights of the Child prohibits all forms of physical punishment of children.

Romania approves Governmental Decision No. 49, which includes a framework methodology for prevention and multidisciplinary intervention for cases of violence against children and domestic violence.

The National Strategy for the Protection of the Rights of the Child 2014-2020 is launched.

The National Strategy for Social Inclusion and Poverty Reduction 2015-2020 is launched, which aims to implement policies around employment, social benefits, access to finance, education, health and housing, particularly among rural areas, within marginalised urban communities, and among the Roma.

A law is adopted on the Rights of the Child, which prohibits violence against children. However, this law is not interpreted as prohibiting all corporal punishment. In November, Romania becomes a pathfinding country.

In March, Romania launches a national campaign promoting awareness of emotional violence against children with the Global Partnership and UNICEF Romania. This campaign is launched in the presence of the Prime Minister, key ministries and civil society.

A National Roadmap is finalized based on a self-assessment of violence against children by the Violence Against Children Subcommittee.

A law is adopted on the Rights of the Child, which prohibits violence against children. However, it is not yet interpreted as prohibiting all forms of corporal punishment.

The National Strategy for the Protection of the Rights of the Child (2014-2020) was developed through multi-stakeholder consultations, including civil society organizations and children. A working group on ending violence against children was established in 2017, and continues to meet regularly to discuss the issue and its challenges.

Plan Z, a multi-agency international pilot program that addresses violence against children, was piloted in Romania between 2017-2018 by Terre des hommes Romania (TDH Romania), Save the Children Romania, and World Vision Romania. The program organized child-led innovation labs to address and solve issues related to violence against children such as bullying in schools with three solutions designed by children: ChildLine in Your School, Forum Theater and Role Play.

In February of 2019, this working group committed to the strengthening of the capacity of Romania's social services workforce, citing it as their annual priority. This built on the November 2018 Regional Conference organized by UNICEF, ECARO and the National Authority for the Protection of Child Rights and Adoption (NAPRCA) on social service workforce development. The latter conference was a high-level event that brought together 200 government officials, academics, civil society representatives, and other stakeholders from across Europe and Central Asia to understand and plan for a competent social service workforce. This goal was seen as a key pillar of social protection and child protection systems, including effective prevention and response to violence.

Romania conducted three Health Behavior in School-Aged Children surveys in 2006, 2010, and 2014. In 2013, a second national study on the abuse and neglect of children provided further national data on violence against children. In the same year, with the support from World Health Organization, the first adverse childhood experiences survey was conducted. UNICEF Romania provided an in-depth look on school violence with studies in 2005 and 2012.

In 2016, the situation of children in state care was systematically analyzed by NAPRCA, UNICEF Romania and the World Bank. This study was used as a baseline for an evidence-based investment in the development of alternative family-type care, and in the expansion of preventive services for families at-risk in local communities.

World Vision Romania conducted a national survey in 2016 on general population’s attitudes towards violence against children, the first segmentation study on this issue in Romania. In 2018, Save the Children Romania published a qualitative analysis on the identification and referral of abuse cases of children under 11.

Federatia Organizatillor Neguvernamentale Pentru Copil (FONPC), a federation of more than 100 non-governmental organisations that promote children’s rights to Romania’s public policy agenda, is working on further developing a set of data on child abuse and neglect. This data will be used to help public agencies develop solutions to child protection issues.

Coordination of these initiatives with NAPCRA in improving data collection at national level is ongoing as part of the End Violence Against Children working group activity.

Romania is one of the few countries that has banned the institutionalization of children less than three years of age. In 2019, this age increased to 7 years old to support the de-institutionalization policy and transition to community-based services.

Investment in the development of preventive local services was and will continue to be a priority, as well as closing old style institutions, strengthening the foster care network, and strengthening effective prevention systems and responses to violence, poverty, discrimination and social exclusion. Non-governmental organizations are sustaining this approach with interventions at the grassroots level. For example:

(b) Save the Children Romania informed 41,500 children on bullying in schools and cyberbullying; and

From 2014-2018, UNICEF Romania ensured parental education for 12,000 parents (out of which 24 percent were fathers). Furthermore, in December 2018, with support from the Global Partnership to End Violence Against Children and UNICEF Romania, NAPCRA shared its national experience in the Edinburgh Winter School and learned about adaptation and measurement of INSPIRE-related interventions. Throughout 2018, UNICEF Romania continued to provide technical assistance and support for Romania as a pathfinding country.

Learnings around preventing and combating violence against children from the ChildHub e-learning platform, which was implemented in Romania by TDH Romania, will be made available for the social services workforce.

Corporal punishment against children has been prohibited in all settings, including the home. 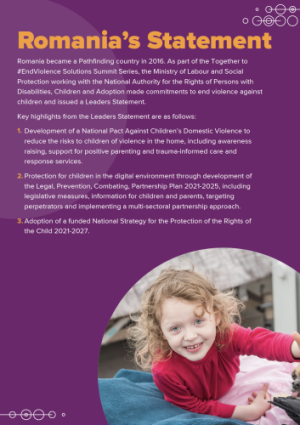 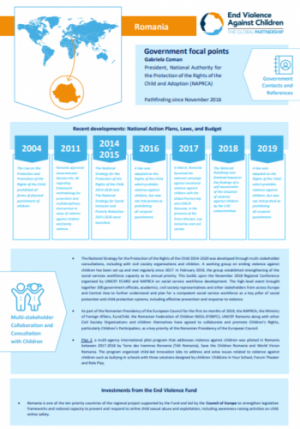 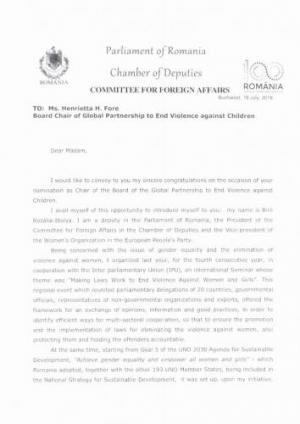 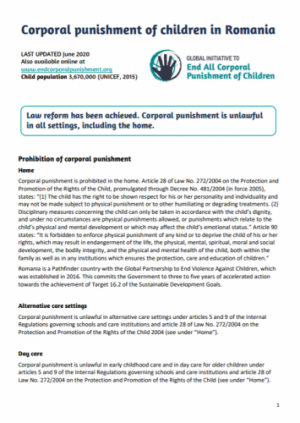 Corporal Punishment of Children in Romania 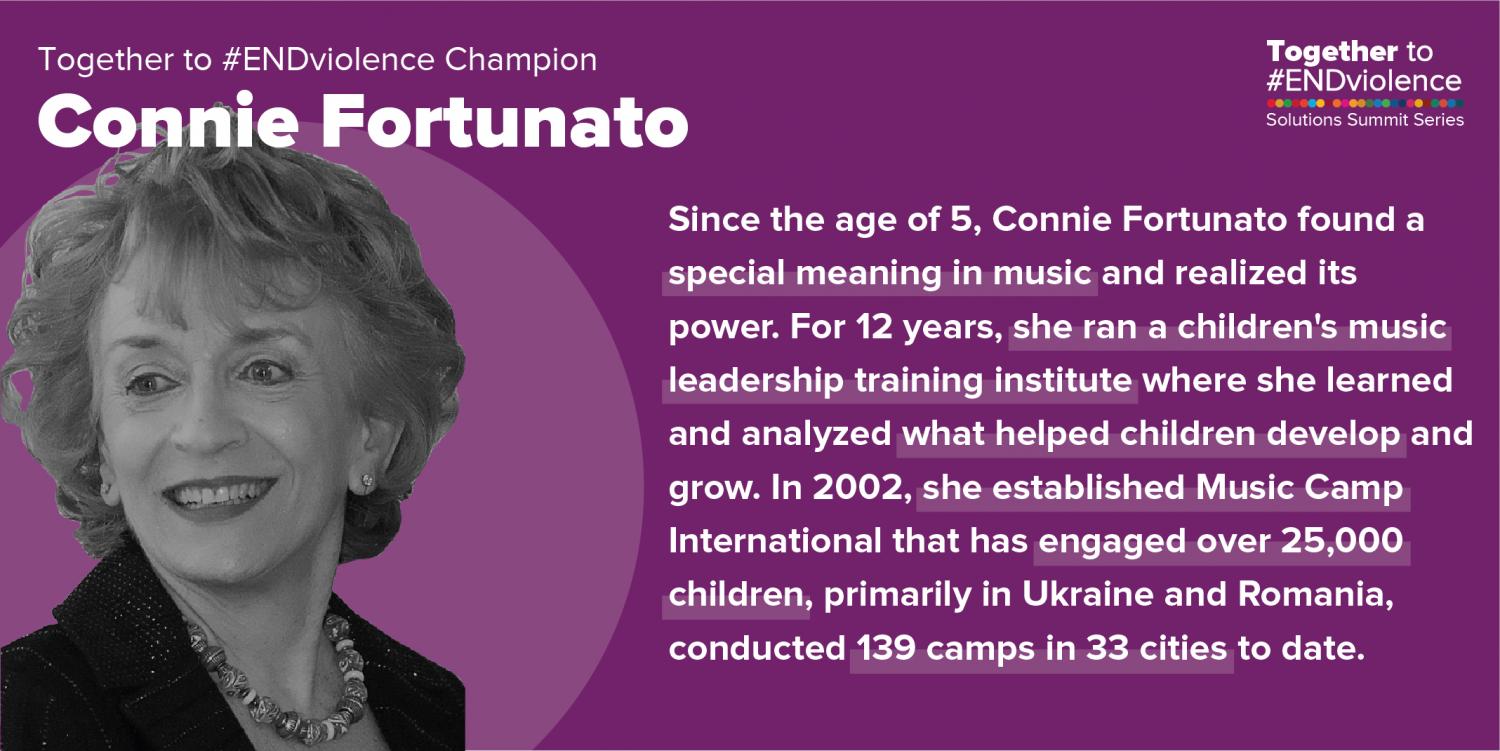 Preventing violence through music: the story of Music Camp International