One in three internet users in the world is a child. Children's lives are now being shaped behind a screen, and every day, children are diving deeper into platforms not designed with their safety in mind. As they absorb information, build friendships and make connections online, disturbing trends are emerging that threaten children of all ages — even those too young to speak. As more and more children, across the globe, start to live their lives online, the number of children at risk of online sexual abuse and exploitation increases. At any given time, an estimated 750,000 people are looking to connect with children for sexual purposes online posing a huge danger to the 800 million children that are actively using social media.

What is online child sexual exploitation and abuse (CSEA)?

Online CSEA can take many forms. It involves production and sharing of child sexual abuse material (CSAM) or any content that depicts sexually explicit activities involving a child. This may include photos, videos, and digital images which are then used for self-pleasure and/or shared more widely on the internet, victimizing the child even further. In most cases, the victims are abused by someone they know and who has close access to the children they are abusing. These perpetrators, sometimes, use child grooming techniques, another form of online violence, to isolate the child and gain control over them, so as to be able to sexually exploit the child. Children can also generate sexualized self-images and videos as they experiment with the online world. This material can end up being shared without their knowledge or consent. Malicious or unintentional sharing of CSAM may also take place between peers. This may take the form of sexting, sextortion, sexual harassment and revenge porn. Additionally, child abuse is regularly live-streamed and individuals pay to watch the live abuse of a child via a video streaming service. This type of abuse is incredibly difficult to detect, due to its real-time nature and the lack of digital evidence. 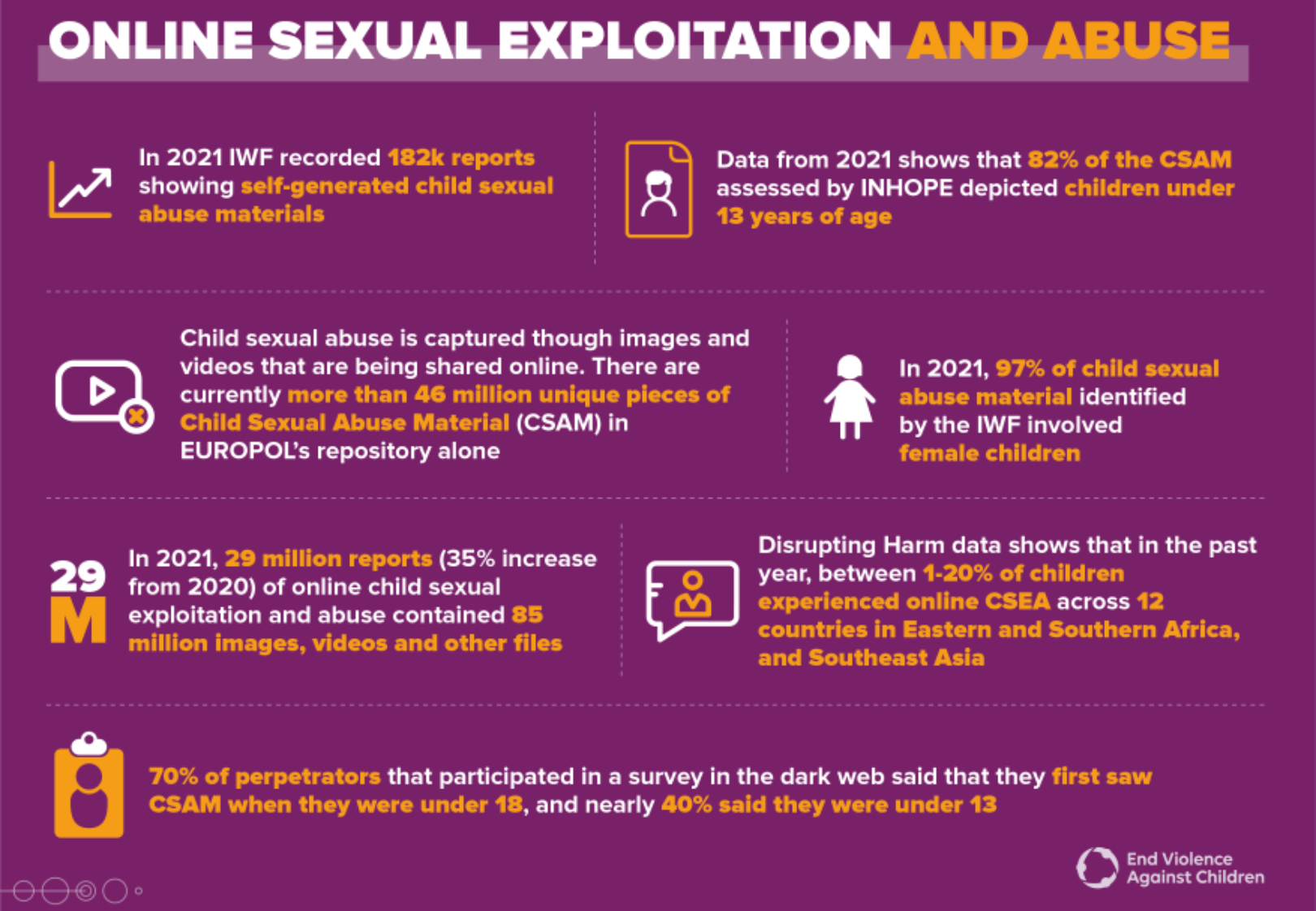 The rise of the internet and digital technologies has been accompanied by an exponential growth in online Child Sexual Exploitation and Abuse (CSEA). With children spending large chunks of their lives online interacting with friends and strangers, it has become increasingly easy for predators to find and engage with potential victims. Child sex trafficking has also increased significantly driven by a growing online market.

The threat of online CSEA is even more extreme for young children. Data shows younger children are at an even higher risk of online sexual exploitation, with 89 per cent of victims between 3 and 13 years of age. A survey conducted by the Canadian Center for Child Protection indicates that 56 percent of online child abuse began before the age of 4, and 42 percent of children were abused for more than 10 years. Reports received by the Internet Watch Foundation show that in the United Kingdom, half of online child sexual abuse cases involve children under age 10, and one-third of those images involve rape and sexual torture.

Simultaneously, there has been a massive increase in numbers of violent and sexual images and videos of children uploaded or live streamed on the internet. A decade ago, there were less than one million reports of child abuse material. In 2021, that number climbed to 29 million, containing over 85 million pieces of suspected child abuse material. Significantly higher number of child sexual abuse material remains undetected, including those on the Dark Web. The expansion of the Dark Web, which is only accessible through specialized software, is another facilitator of online child sexual abuse and many of the worst forms of child abuse happen through the Dark Web.