Zimbabwe became a pathfinding country in October of 2019. The country’s commitment to ending violence against children builds on years of action, including the National Action Plan III for Orphans and Vulnerable Children (2016-2020), which was informed by the first VACS and Drivers of Violence study. 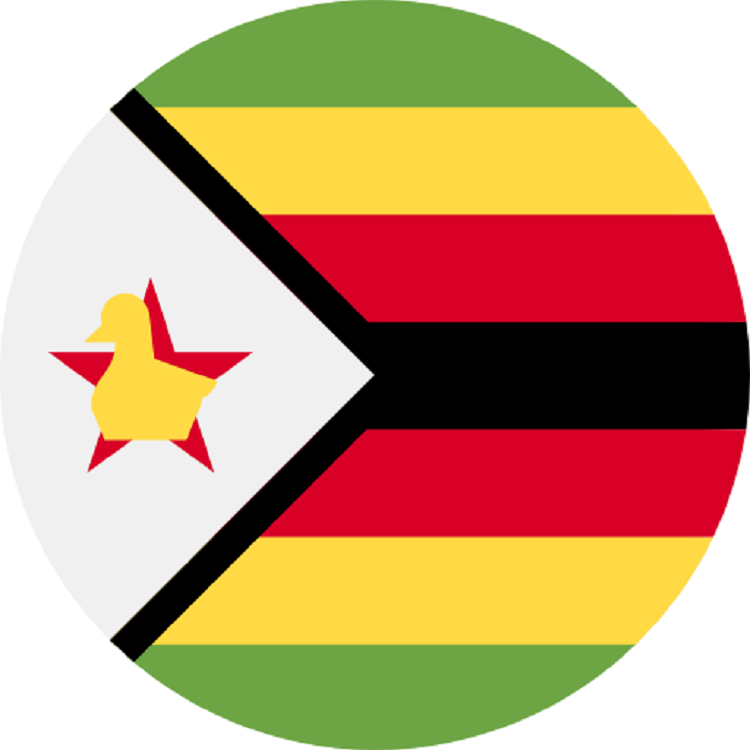 The National Baseline Survey on the Life Experiences of Adolescents (NBSLEA), the first Violence Against Children Survey (VACS), is launched in Zimbabwe.

Zimbabwe joins the Multi-Country Study on the Drivers of Violence Affecting Children, led by UNICEF’s Office of Research – Innocenti.

Zimbabwe launches the National Action Plan III for orphans and vulnerable children (2016-2020), which was informed by the first VACS and Drivers of Violence study. Zimbabwe then publishes a report to better inform prevention interventions: Addressing Social Norms that Underpin Violence Against Children in Zimbabwe: Findings and Strategic Planning Document.

The Ministry of Health and Child Care launches the second VAC survey, which was published in 2019.

A national multisectoral coordination committee on online safety is launched (ZICOP). Soon after, the country participates in the regional Training of Trainers workshop on INSPIRE in Namibia and develops a draft INSPIRE implementation plan. Soon after, Zimbabwe joins the End Violence Partnership and a bill banning corporal punishment in schools is put under discussion in Parliament. A National Action Plan for Ending Child Marriages 2019-2021 is launched.

In 2021, Together for Girls teamed up with Safe to Learn partners and others to produce a series of fact sheets analysing school-based gender-related violence in specific countries. In Zimbabwe, they found that 8 per cent of female students and 11 per cent of male students experience sexual or physical violence in schools.

These analyses are supplemental to each country's Violence Against Children Survey Report, nationally representative household surveys of children and young adults ages 13 to 24 years that measure the prevalence and circumstances surrounding emotional, physical, and sexual violence against males and females in childhood, adolescence, and young adulthood. The Government of El Salvador published its Violence Against Children and Youth Survey (VACS) Report in 2019. Explore the data. 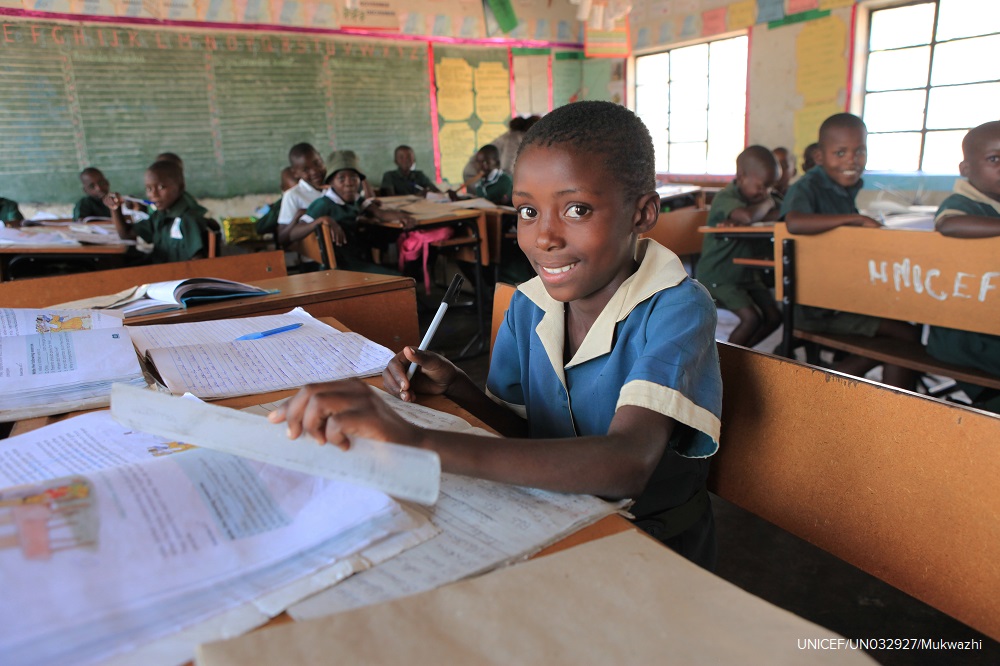 The Working Party of Officials (WPO) is the coordination body for preventing and ending violence against children in Zimbabwe. The WPO is chaired by the Minister of Public Service, Labour and Social Welfare (MoPSLSW) and includes justice, health, education sectors, UNICEF and various civil society organisations.

For the development of the more comprehensive national action plan to end violence against children, a dedicated committee will be formed under the WPO composed of relevant government, civil society and UN stakeholders.

Zimbabwe is also coordinating a Victim Friendly System on sexual violence, which brings social and justice sectors together to focus on this issue.

The Justice Law and Order Sector is the coordination body around justice, which discusses law enforcement policy and programmes and includes the Ministry of Justice, Police and Prosecution, along with justice- and rights-focused civil society organisations.

In addition, a task force was been established in 2019 to increase children's online safety, which is co-chaired by UNICEF and the Zimbabwean Police and includes the ICT Ministry, MoPSLSW, SC and other key stakeholders to address this emerging issue.

In 2013, a Violence Against Children National Survey, the National Baseline Survey of Life Experiences of Adolescents Report, was released. It indicated that both girls and boys experience an unacceptably high level of sexual and physical violence, with girls at higher risk of sexual violence. The study also found that only a small percentage of those experiencing violence were accessing services. These results informed a multi-sectoral protocol to address child abuse and sexual violence.

In October 2014, the Government of Zimbabwe and the Ministry of Women Affairs, Gender and Community Development launched a National Girls’ and Young Women’s Empowerment Framework, which detailed the government’s commitment to empowering girls and young women to contribute to the country’s economic future and development. The findings also informed the review of other existing National Action plans such as the National Action plan for Orphans and Vulnerable children.

In 2014, Zimbabwe joined a multi-country study on the drivers of violence to understand the underlying causes of violence. This led to the adoption of a social norm strategy as well as strengthening the Harmonized Cash Transfer Program with complementary child protection interventions.

In 2019, the second VACS was released by the Ministry of Health and Childcare. While there have been some improvements in terms of preventing violence against children, it remains a concern. Both girls and boys still experience unacceptably high rates of sexual and physical violence. Access to services remains a concern, with only 14% of girls telling someone about experiencing sexual violence receiving services.

In 2019, the MoPSLW participated in the regional Training of Trainers workshop on INSPIRE in Namibia and drafted an INSPIRE implementation plan.

Additional in-country training for the coordination body and partners was contemplated in 2020 but was postponed due to the COVID-19 pandemic.

Prohibition is still to be achieved in the home, alternative care settings, day care, schools and in penal institutions. Corporal punishment is unlawful as a sentence for crime under a 2019 Constitutional Court ruling but prohibition has not yet been confirmed through law reform. 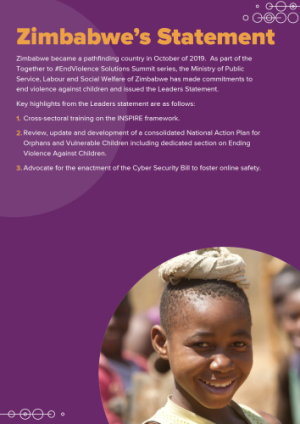 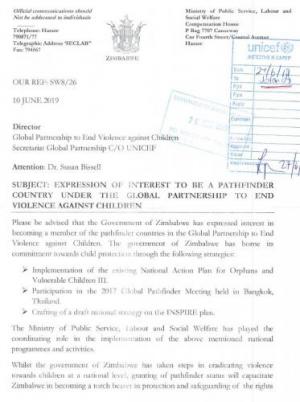 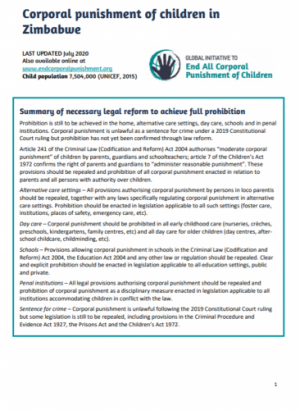 Corporal Punishment of Children in Zimbabwe