In May of 2018, Peru became a pathfinding country. Ever since, the country has issued a number of regulations that combat child abuse, using political will to change societal standards around violence. Organisations in Peru are also being supported by the End Violence Fund, including CHS Alternative, Save the Children Peru, and jointly, ICMEC and Child Helpline International.

Peru approves the National Plan of Action for Children and Adolescents (PNAIA 2012-2021).

Defensoría Municipal del Niño y del Adolescente, (Public Defender Office for Children and Adolescents at the Municipal Level) launches the Municipal Plan of Action to strengthen the services of municipal public defense offices. Peru conducts a National Survey of Social Relations: ENARES, which includes children's thoughts on violence against them. The budget for "Timely Attention to Children in a State of Abandonment" is also approved, which later creates a rapid response system for children who have been abandoned by their legal caregivers.

Peru is included as one of four countries worldwide to participate in the Multi-national Study on the Drivers of Violence Against Children.

Peru conducts the second National Survey of Social Relations: ENARES, followed by the adoption of Law No. 30403, which bans physical and humiliating punishment of children.

Support is provided to over 10,000 children affected by an earthquake through the Smiles Program. Law No. 1297, Protection of Children Without or At-Risk of Losing Parental Care, is approved. By this time, Defensoría Municipal del Niño y del Adolescente coverage reaches 95 percent of districts.

Peru becomes a pathfinding country and approves Law No. 30466, which establishes procedural parameters and guarantees for the primary consideration of the best interests of the child. The regulatory frameworks are also approved for Law No. 1297, which defines an intervention to protect children at risk of family abandonment, and Law No. 30403, which prohibits the use of physical and humiliating punishment against children and adolescents.

PROTECTING ON AND OFFLINE

In September 2019, the Government of Peru, which became a Pathfinder in December 2017, hosted a multisectoral consultation event to discuss the development of their National Action Plan to Eliminate Violence Against Children and Adolescents 2020-2030. This event, co-organised by UNICEF and with support from End Violence, brought together representatives from across government, civil society, the private sector, media and international organisations to collaborate on the elaboration of the National Action Plan, which has been designed around key INSPIRE strategies and is due to be launched in 2020.

Peru's National Action Plan is part of a broader architecture of child protection systems and laws, and is oriented to address the government’s national and international responsibility to end violence against children. The effort is being led by the Ministry of Women and Vulnerable Populations and supported by End Violence and other partners to reach the almost 9.8 million children and adolescents across Peru.

In addition, three grantees of the Safe Online window of the End Violence Fund operate in Peru to combat online child sexual exploitation and abuse, including Capital Humano y Social (CHS) Alternativo, Save the Children Peru, and the International Centre for Missing & Exploited Children (ICMEC). 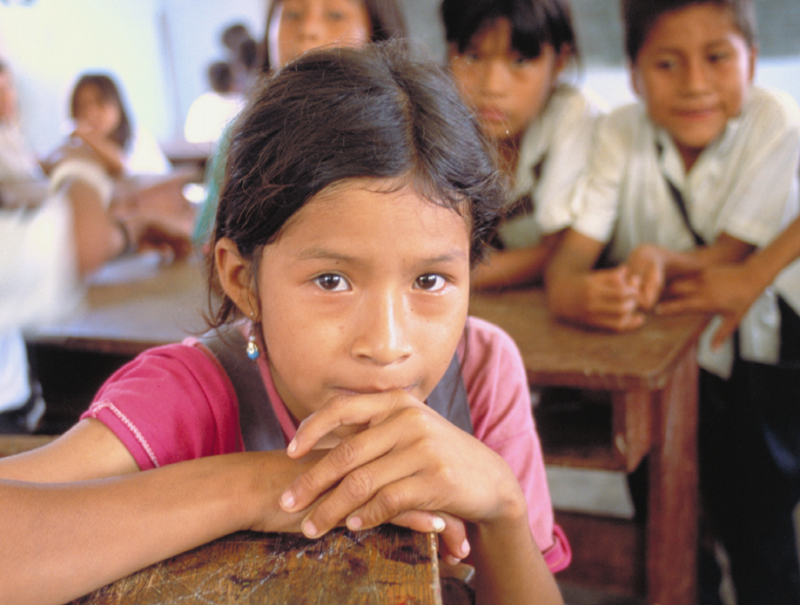 In November 2016 the Ministerio de la Mujer y Poblaciones Vulnerables was nominated as the governing body of childhood through the Ministry of Foreign Affairs.

The National Plan of Action for Children and Adolescents 2012-2021 is a space for coordination and articulation with different governmental and non-governmental actors. The Commission of Outcome 20 addresses violence against children.

A working group developed the taxonomy of public investment regarding children policies. These results were presented to the permanent multi-sectoral commission in charge of implementing the National Plan of Action for Children and Adolescents 2012-2021. The methodology has been adopted as the official monitoring mechanism for implementation of the plan and public investment in children.

In 2013, the National Institute of Statistics and Informatics conducted the National Social Relations Survey, including data on violence against children. The survey was repeated in 2015.

In 2014, Peru became one of four countries that participated in a multinational study of the drivers of violence, along with Italy, Vietnam and Zimbabwe.

In 2017 Peru approved Law No. 1297, which defines a model of intervention to protect the child against situations of risk and family abandonment.

In June, 2018, Supreme Decree No. 003-2018-MIMP resulted in the approval of a regulatory framework for Law No. 30403, which prohibits the use of physical and humiliating punishment against children. Soon after, Law No. 30466 is approved, which sets parameters to guarantee the best interests of the child.

More than 17 special protection units and three centers of residential attention in emergency are strengthened.

Peru has 47 JUGUEMOS services which are designed to strengthen the capabilities of children through playful methodologies that teach self-protection strategies. Five of these services are working on itinerant social action platforms, which reaches communities on the banks of Peru's large rivers: Napo, Morona, Putumayo Alto, Putumayo Bajo and Lake Titicaca.

Peru has two budget programs to respond to violence against girls, boys and adolescents: PP No. 0080, Combating Family Violence, which seeks to reduce violence towards women and family members; and PP No. 0117, Timely Attention to Children in Presumed States of Abandonment, which aims to ensure that the mother, parent or caregiver assumes the parental role. 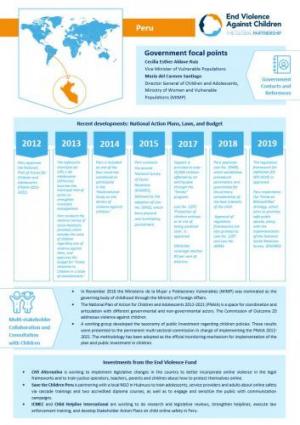 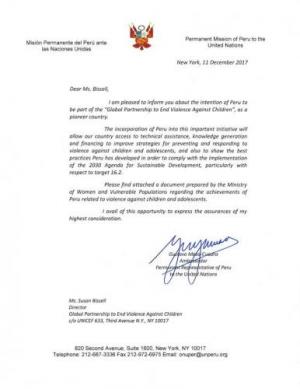 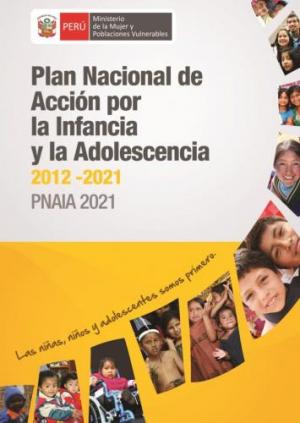 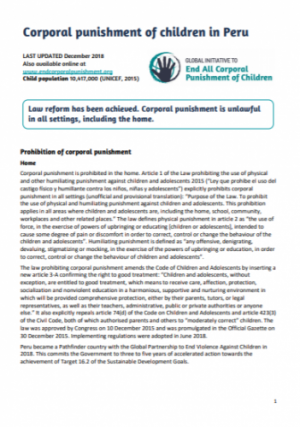 Corporal Punishment of children in Peru