Paraguay was one of the first countries in the world to become a pathfinder, committing itself to ending violence against children in 2016. To curb high rates of abuse, violence and exploitation of children, the government and civil society organisations are using INSPIRE strategies to change cultural and societal norms in Paraguay.

Paraguay’s President formally adopts "20 Commitments to Improve the Quantity and Efficiency of Investment in Childhood and Adolescence" with support and leadership from UNICEF. Progress towards the eradication of violence against children is one of its main goals.

Law No. 5659 is passed, which prohibits corporal punishment of children in all settings.

Paraguay becomes a pathfinding country with the Global Partnership to End Violence Against Children.

Parallel to the publication of the Drivers of Violence Against Children report, the Government of Paraguay launches the National Plan of Action for the Protection of Children from All Forms of Violence (2017–2021).

On 16 August 2018 (Children’s Day), President Mario Abdo Benítez ratifies the 20 commitments in favor of children and adolescents. These commitments, which were promoted by more than 20 civil society organisations, were passed as the President's first act of government.

A coalition of child-focused agencies signed a cooperation agreement with the Ministry of Childhood and Adolescence to provide technical support and develop actions to implement SDG 16.2 and related targets. These agencies have worked closely with the government and civil society, including children, to develop Paraguay’s Action Plan to End Violence Against Children.

In May 2018, a seminar was held on child and adolescent participation and the eradication of violence against children. The seminar gathered representatives from government, civil society organisations and regional bodies. Participating organisations signed a statement to disseminate and replicate the initiatives presented in the seminar within the Latin America and the Caribbean region.

In 2011, the first representative research sample on violence against children was published at the national level.

In May of 2017, a follow-up report was launched, entitled The Drivers of Violence Affecting Children in Paraguay. The report synthesizes key findings available in the literature, as well as community perceptions that perpetuate violence against children.

In November 2017, with support from UNICEF, the Government launched the Multiple Indicator Cluster Survey, which covered nearly 8,000 homes across Paraguay. The survey, the first of its kind in the country, found that nearly 50 percent of those interviewed used violence as a form of discipline, highlighting the pressing need to work with families and caretakers to reduce violence against children.

In Paraguay, child-friendly accountability initiatives aim to improve child protection systems at the local, regional and national levels by holding governments and local leaders accountable for their obligations to end all violence against children, in accordance with target 16.2. Civil society organisations have developed an open-source child-friendly accountability mechanism, as well as an information and communications technology platform, to connect and scale up community-based action. This allows for regional and national monitoring of child protection and joint action to improve it. The initiative uses an open-source format that local civil society organisations can adapt.

The National Action Plan contains a roadmap and priorities for guaranteeing the right of children to protection from violence. The first phase of the action plan took place between 2017 and 2018. Several INSPIRE strategies are included in the plan. The cost of Paraguay’s National Plan of Action is estimated to be US $50 million for a five-year period. However, the current budget for the direct care of children and adolescents is US $12,000, and even with additional support from non-governmental organizations and cooperation agencies, only 5 percent of the annual funding is available.

Paraguay is an active member of the Permanent Commission of the NiñoSur Initiative from Mercosur, which addresses child-protection issues in Paraguay, Uruguay, Brazil and Argentina. As President Pro Tempore of the bloc, Paraguay hosted the XXXI Meeting of Human Rights Authorities of Mercosur RAADHH in June 2018, where civil society organisations, including children and adolescents organized through the National Network of Childhood and Adolescence, presented advances and their experiences on ending violence against children.

Corporal punishment is prohibited in all settings, including at home. 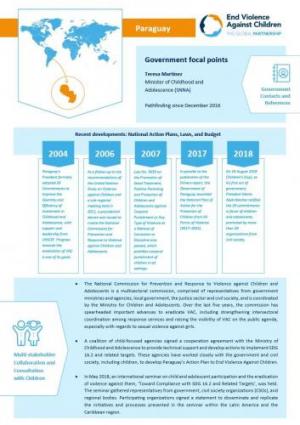 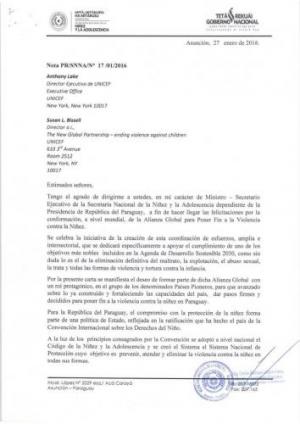 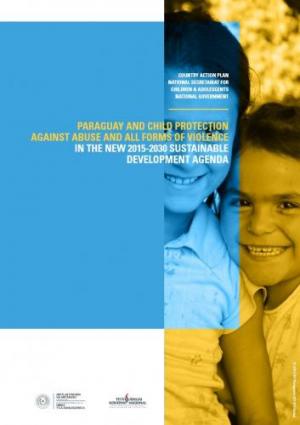 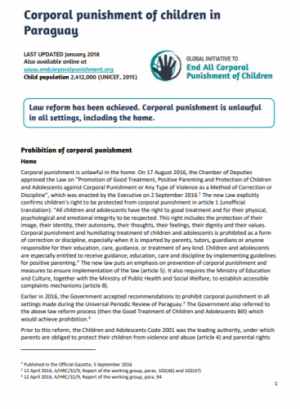 Corporal Punishment of children in Paraguay