Montenegro became a pathfinding country in 2017. Soon after, Montenegro created a Strategy for the Prevention and Protection of Children against Violence, the vision of which is to create "a violence-free environment for happier childhoods." Montenegro is also supported by the End Violence Fund, and is one of 10 priority countries reached by a regional project led by the Council of Europe. This project is strengthening legislative frameworks and boosting national capacity to prevent and respond to online child sexual abuse and exploitation.

In January, the government holds annual high-level inter-ministerial meetings on the protection of children from violence and exploitation, with the objective of fostering inter-sectoral cooperation, facilitating dialogue at the highest political level, and directing government policy. The Family Law of Montenegro is soon amended, prohibiting all forms of violence against children including corporal punishment in all settings (including the home). In July, a multi-year campaign, End Violence, is launched by the Prime Minister of Montenegro, reiterating the Government’s commitment to end violence against children and to promote systematic efforts to prevent it. The first phase addresses online violence.

In February, Montenegro became a pathfinder country. The government launched the second phase of the End Violence campaign at a high-level conference, focusing on family violence and all forms of childhood adversity. This conference sparked a public debate on the protection of children from all forms of violence. Soon after, the Government launched the first Montenegro Strategy for the Prevention and Protection of Children from Violence and the Action Plan 2017–2021.

Montenegro’s National Action Plan 2017–2021 to prevent and protect children from violence was developed through multi-stakeholder, multi-sectoral consultations. These consultations included representatives from the government, UNICEF, non-governmental organizations, academia, the media, and youth networks. They identified the vision, goals and strategic objectives with a multidisciplinary response. They also covered key areas, such as schools, primary health care centers, social services and the judicial system.

In addition, community-based multidisciplinary teams now operate in 17 municipalities, all of which focus on preventing domestic violence and violence against children. These teams have created a comprehensive multi-sectoral approach to the protection of children from all forms of neglect, abuse, violence and exploitation.

In 2013, the first survey on adverse childhood experiences was carried out in 2013. It reported a high prevalence of violence and other adversities in childhood at a policy dialogue supported by the World Health Organization. Also in 2013, the research institute Ipsos carried out a survey on the awareness, attitudes and practices of violence against children, which was contracted by UNICEF.

In 2016, Ipsos carried out a survey among the public related to violence against children, which was contracted by the SOS Helpline for Women and Children Victims of Violence (Niksic), the Centre for Women's Rights, and UNICEF.

In addition, research was conducted on the online experiences of children and parents within the Global Kids Online research network developed by UNICEF Innocenti, in collaboration with the London School of Economics.

(a) amend the Labour Code to incorporate provisions stipulating a record of no prior convictions for severe violence against children, in particular for sexual exploitation or abuse, as a job requirement for people working with children;

(b) eliminate the repeated victimization of children and witnesses by setting up separate child-friendly rooms in courts and prosecution offices, separating the child from their perpetrators, using video links to interview children in separate rooms and upgrading the equipment to do so;

(c) enhance the quality and frequency of home visits by nurses to families with newborn babies; and

(d) set up child and adolescent psychiatric wards and develop quality services to work with the perpetrators of violence against children.

Following the 2017 Action Plan, the Ministry of Health began strengthening home care services and developing a protocol on the work of health care institutions in prevention and response to violence against children. At the same time, the Ministry of Interior issued guidelines for institutions to identify and prosecute cases of child marriage and domestic partnership.

Within the WePROTECT global programme on fighting online child sexual exploitation, the Net Friend educative mobile app for children was launched to raise awareness of online safety among children and the general public. Though the first helpline for children affected by violence was established in 2012, in 2017, a national parental helpline was launched, providing free counseling for parents in need of support.

In 2018, the Parenting for Lifelong Health Program was piloted and implemented by health centers, kindergartens and non-governmental organisations. This program targets parents of children from age 2-9, helping them enhance parenting skills and ultimately, reduce rates of child abuse and neglect.

Corporal punishment of children is prohibited in all settings, including the home. 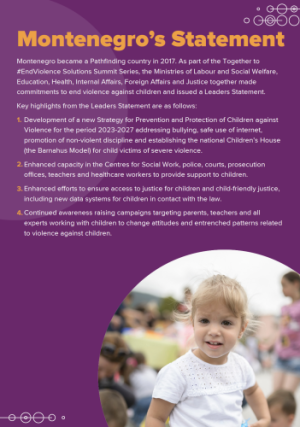 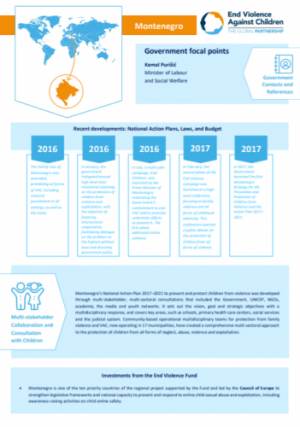 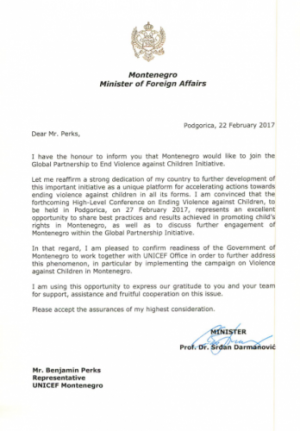 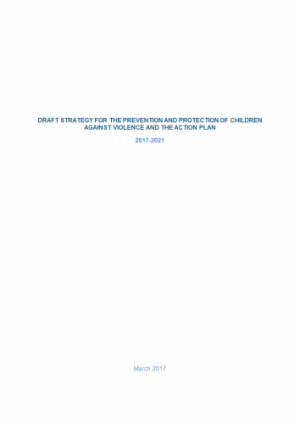 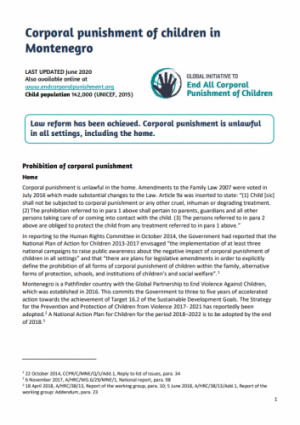 Corporal Punishment of children in Montenegro