Mexico was one of the first countries to become a pathfinder in May of 2016. Ever since, Mexico has taken huge steps forward: more than 100 civil society organisations are actively pushing for children's rights on the national level. The End Violence Fund has supported projects that build the capacity of child lawyers and case workers in Mexico, working to protect children and demand specific actions from child justice institutions.

Mexico adopts the Central American Regional Roadmap on Violence Against Children, which includes a commitment to prohibiting corporal punishment of children.

The General Law on Comprehensive Protection of Children and Adolescents is approved, codifying the rights and principles of the CRC into national law and establishing a comprehensive national child protection mechanism to coordinate policy at different levels of government.

The Federal Office for the Protection of Children and Adolescents is established to assist children with violated rights. The state of Guanajuato amends its Civil Code to enact a full prohibition of corporal punishment, including in the home.

Mexico becomes a pathfinding country in May of 2016, making a formal, public commitment to ending all forms of violence against children. In December, the Intersectoral Commission on Violence is created in preparation for the development of a national action plan.

In August, Mexico’s national action plan for 2017-2018 is launched. The plan concludes in November 2018 and a Final Report is published on the outcomes of 31 concrete actions.

In April, the Government hosts the Inter-American Meeting on Corporal Punishment, sharing experiences and best practices for ending corporal punishment across the region, as well as the Regional Consultation on School Bullying. Joint declarations are published in Spanish and English. Mexico also becomes a pathfinding country in 2018, making a formal, public commitment to comprehensive action to end all forms of violence against children.

The development of the national action plan for 2017-2018 was highly participatory and included consultations with different institutions of the federal government, 24 civil society organizations, three autonomous bodies, the chambers of the National Congress, the Federal Judicial Authority, members of Mexican academia, UN organizations, and children and adolescents themselves.

In 2018, UNICEF Mexico, with the support of the National System for the Comprehensive Protection of Children and Adolescents and World Vision Mexico, organized meetings with adolescents and related agencies to identify priorities and actions to end violence against children until 2030.

To coordinate policy at the local level, 32 states have approved laws on the protection of children and adolescents and established comprehensive child protection mechanisms.

Mexico has significantly increased its data collection of violence against children in the past several years, especially regarding corporal punishment, physical and sexual violence against adolescents, violence in schools, homicides, and perceptions of violence. This has included four censuses, four administrative records and six national surveys.

The national action plan was linked to the implementation of the General Law of the Rights of Children and Adolescents of December 2014. The plan included 31 concrete actions and cross-cutting activities, the first phase of which focused on strengthening current government interventions by December 2018. The second phase aims to reinforce implementation and coordination in three Mexican federal entities through pilot projects, which will receive technical support: Baja California Sur, Guerrero and Tamaulipas. The third and last phase will provide the opportunity to further define actions until 2030.

The members of the End Violence Against Children coalition also helped to drive the #MxporlaNiñez movement, which brought together more than 100 civil society organizations in Mexico to promote a national dialogue around the Agenda of Childhood and Adolescence during the 2018 election.

Nine commitments to children and adolescents (two of which focused on violence against children) were put forward for public debate. In April 2018, several candidates, including current president Andres Manuel Lopez Obrador, declared their public commitment to the #MxporlaNiñez movement.

In October 2018, the Executive Secretariat of the National System for the Comprehensive Protection of Children and Adolescents and the Global Initiative to End All Corporal Punishment of Children held a two-day workshop aimed at strengthening the capacity of state authorities to prohibit and eliminate corporal punishment in all settings. Representatives from the government, juvenile justice and child protection systems, and federal authorities collaborated to develop state strategies and prohibit corporal punishment.

Mexico indicated its commitment to prohibiting corporal punishment when, in 2011, the Government adopted the Central American Regional Roadmap on Violence against Children, which recommends full prohibition. 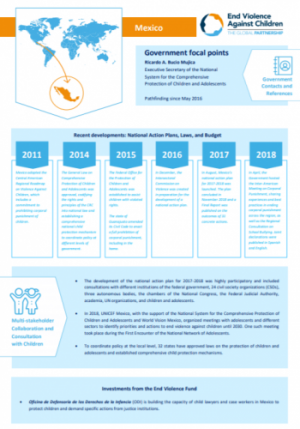 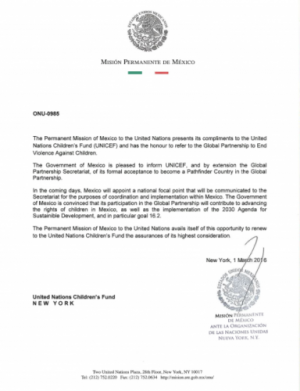 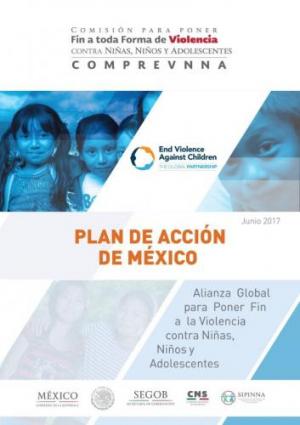 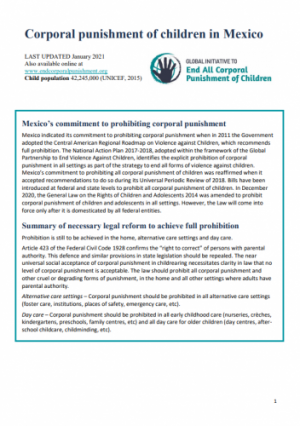 Corporal Punishment of children in Mexico