Jamaica was one of the first countries to become a pathfinder in 2016. Both non-governmental organizations and the government have joined forces to end violence against children, and by 2023, have committed to increasing services for violence-affected children by 20 percent.

The Child Care and Protection Act is passed. This act aims to promote the best interests, safety and well-being of children across the country, outlining the circumstances under which a child may be removed from their family in cases of abuse, neglect and exploitation. It also bars children from employment before age 15 and states that no child under the age of 12 can be convicted of a crime.

The Victim’s Charter is passed, which aims to support victims of crime throughout the criminal justice process.

The Children’s Home Regulations is passed, which sets standards for children's homes to ensure safety.

In November, Prime Minister Andrew Holness states his commitment to prohibiting corporal punishment in schools and to commencing discussions in Parliament on prohibition in all settings, including the home.

In June, the government finalizes a draft 5-year National Plan of Action for an Integrated Response to Children and Violence 2018 – 2023, but does not launch the plan. In December, the Minister of Education, Youth and Information pledges to work with the Office of the Children’s Advocate to build awareness about alternative approaches to corporal punishment. The Office of the Children’s Advocate partnered with ISPCAN to host the ISPCAN Regional Caribbean Conference.

On the eve of World Children's Day in 2019, the Jamaican Parliament held a special session on violence against children. During this session, children addressed the Parliament for the first time in Jamaica history — and the issue they chose to speak about was violence. Children like 7-year-old Ngozi, pictured above and to the right, called for urgent action to protect children.

The session was organised by UNICEF Jamaica, the Office of the Children's Advocate, and the Ministry of Education, Youth and Information. It called for urgent action by the government to implement the National Plan of Action for an Integrated Response to Children and Violence 2018-2023, which had been tabled earlier in 2019.

During that session, Prime Minister Andrew Holness launched the national action plan, and the government continues to work with non-governmental organisations, UN agencies, and others to implement it. 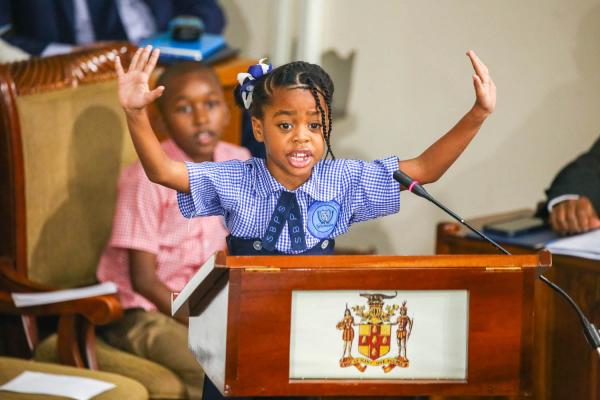 In November 2016, close to 100 stakeholders from six ministries, key government agencies, the United Nations, the private sector, academia, civil society, and youth themselves met at the Office of the Prime Minister for a high-level launch of the Jamaican initiative.

A wide range of stakeholders and partners, including government ministries, departments, and agencies; civil society organizations; and international development organizations, revised the national action plan. Special consultation sessions were held with media and communications specialists for the development of a public education strategy. Consultations with children are ongoing, and are spearheaded by the Child Protection and Family Services Agency.

A two-day meeting of the Anti-Bullying Technical Working Group took place in February 2019 to strengthen national efforts to tackle bullying.

In 2015, the results of the anti-bullying study, Investigating the Prevalence and Impact of Peer Abuse on the Development of Jamaica’s Children, were released.

The national action plan calls for the development of a comprehensive monitoring and evaluation system using OCR, Police and JAMSTATS data. Child protection statistics are currently accessible through JAMSTATS.

The 2018-2023 action plan and an associated roadmap articulates the government’s plan to implement the INSPIRE framework. The plan calls for a reduction in the number of reported cases of violence against children by 15 percent, a 20 percent increase in the provision of services for children who are victims of violence, a promulgation of laws protecting children, and an investment into public awareness campaign to change social norms.

The Child Care and Protection Act is currently before a Joint Select Committee of Parliament (alongside the Sexual Offences Act, the Offences Against Persons Act, and the Domestic Violence Act) to strengthen the legislative framework to better protect children and other vulnerable members of society.

Corporal punishment is prohibited in some settings. Prohibition is still to be achieved in the home, some daycare and schools. 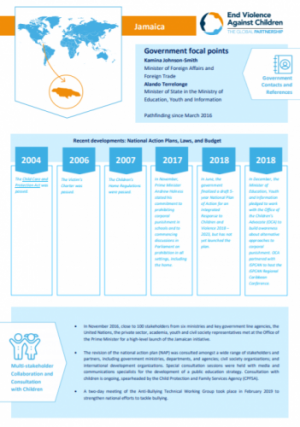 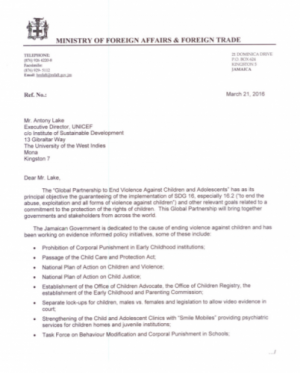 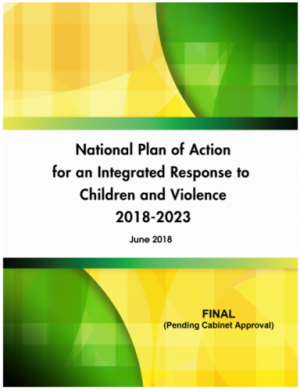 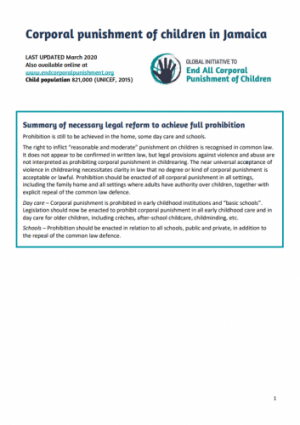 Corporal Punishment of children in Jamaica