Since May of 2018, Georgia has committed to ending all forms of violence against children as a pathfinder country. Since then, Georgia has worked to raise awareness of violence against children and change societal norms around the issue. Georgia is also supported by the End Violence Fund, and is one of 10 priority countries reached by a regional project led by the Council of Europe. This project is strengthening legislative frameworks and boosting national capacity to prevent and respond to online child sexual abuse and exploitation.

Natalia Jaliashvili
Head of the Human Rights Secretariat, Administration of the Government of Georgia

The Ministry of Labour, Health, and Social Affairs establishes minimum standards for childcare.

A chapter on violence against children is added to the National Action Plan on Human Rights Protection 2014-2020, which is signed by decree by the Prime Minister in January 2018.

Georgia becomes a pathfinding country, making a formal, public commitment to comprehensive action to end all forms of violence against children. The same year, the government establishes an inter-agency commission to be responsible for the implementation of the Convention of the Rights of the Child, and for effectively coordinating among various levels of government, different regions, agencies and other partners. Protecting children from violence is one of the commission's priorities.

The government reported to the Committee on the Rights of the Child that it was committed to implementing the Committee's previous recommendations on corporal punishment.

In September, Georgia bans corporal punishment against children by adopting the Code on the Rights of the Child.

Ending violence against children is one of the key objectives of the Interagency Commission, a multi-stakeholder platform made up of government agencies and civil society organizations. It is  chaired by the head of the Human Rights Secretariat of the Administration of the Government of Georgia. The Commission engages with the Judiciary Power, the Parliament, the Ombudsman Office, non-governmental organizations, and international partners.

Children and young people’s voices were heard and included in the National Survey of Knowledge, Attitude and Practices study, which was undertaken by UNICEF through group discussions on violence against children conducted in both West and East Georgia. Children will continue to participate in evaluations and the elaboration of policies, adding input on how to improve services for violence prevention and response.

UNICEF carried out Multiple Indicator Cluster Surveys in 1999 and 2005.

In 2013, the National Survey of Knowledge, Attitude and Practices study concluded. The study assessed the Georgian general public’s knowledge, attitude, behaviors and practices toward the issue of violence against children. The quantitative study was administered to 3,284 households randomly selected across the country and to 61 professionals, including social workers, teachers and school resource officers.

In 2018, UNICEF launched a national website on data, which included information and statistics on violence against children.

Parliament is currently discussing the second draft of the Child Rights Code, based on recommendations and standards from the  Convention on the Rights of the Child. In recent years, an inter-ministerial working group, with the support of UNICEF, has developed a package of legislative amendments focused on protecting children from violence. In 2016, for example, the Parliament of Georgia approved more than 10 revisions in laws and regulations to improve legal safeguards of children living and working on the streets and victims of domestic violence.

In 2018, UNICEF Georgia, with support from the EU, organized an End Violence campaign based on the results of the social norms study conducted in the same year. The campaign set up community meetings, debates and teacher training sessions. A social media campaign was conducted in parallel.

In 2019, ChildHub, UNICEF and the Global Partnership to End Violence Against Children organized a sensitization training on INSPIRE with local partners from the government and civil society. The focus was on different INSPIRE strategies that address violence against girls and boys through prevention and response, and the importance of cross-sectoral approaches and collaboration to achieve sustainable results. It also included a training module for instructors.

The Initiative for Social Changes (ISC), a local non-govermental organization, is currently implementing the Promotion of the INSPIRE Strategies in Georgia Project, which is supported by the INSPIRE Fund. ISC established the INSPIRE Working Group Georgia, which is composed of representatives from relevant ministries, the Georgian Parliament, the Supreme Court, the Prosecutor’s Office, the Public Defender’s Office, and 11 international and local non-governmental organizations who underwent a two-day INSPIRE training.

ISC has also translated the INSPIRE core document into Georgian and is facilitating meetings of the INSPIRE Working Group Georgia to organize a large-scale event.. 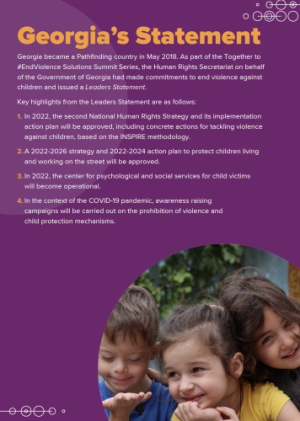 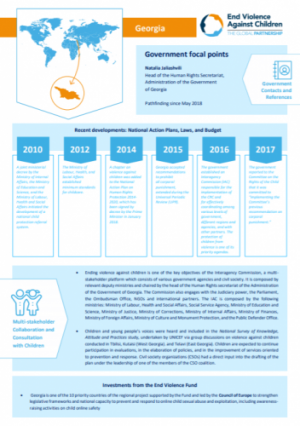 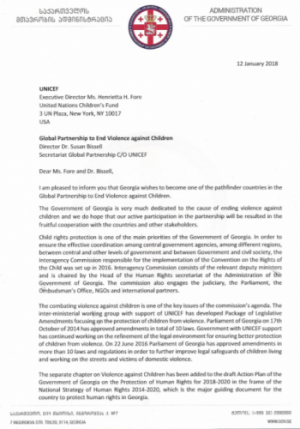 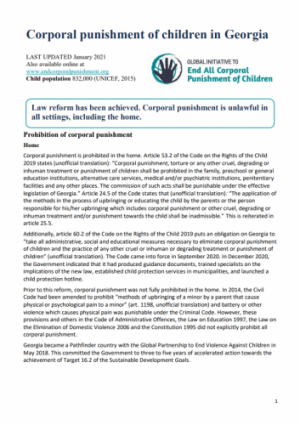 Corporal Punishment of Children in Georgia