Finland became a Pathfinding country in May of 2020. This announcement follows the release of Finland's new, five-year action plan to prevent violence against children. This action plan, which focuses on children aged 0-17, includes the implementation of the Barnahus Model throughout the country.

Finland is the second country to prohibit corporal punishment of children through the Child Custody and Right of Access Act (361/1983).

The Child Welfare Act 2007 states that parents and guardians are responsible for the child’s well-being as specified in the Child Custody and Right of Access Act 1983 (art. 2) and provides for support for parenting as an element of preventive child welfare (art. 3).

The National Action Plan against Disciplinary Violence 2010 to 2015 aims to halve the infliction of corporal punishment on children by 2012, to support parents in developing non-violent disciplinary methods and to establish regular studies on disciplinary violence.

In November, the Non-Violent Childhoods Action Plan for the Prevention of Violence against Children 2020–2025 is published. The cross-government plan includes national targets and 93 research-based measures to prevent physical, emotional and sexual violence against 0-17-year-olds in different growth and operating environments. The implementation plan will be published in early 2021.

Finland becomes a Pathfinder through the End Violence Partnership.

Finland becomes Pathfinding in May 2020

In May of 2020, Finland became the 30th Pathfinding country to join the End Violence Partnership.

“The Government of Finland looks forward to contributing to the Partnership by sharing effective models and lessons learning, and to learning from other Pathfinder countries and partner organisations,” said Paivi Sillanaukee, the Director-General of Finland’s Ministry of Social Affairs and Health.

Once a country becomes pathfinding, they commit to prioritising children's safety by making a formal, public commitment to ending all forms of violence against children; appointing a senior government focal point to lead the in-country process; and developing an evidence-based and costed national action plan that sets commitments for three to five years, along with a related resource mobilization plan and other activities.

This announcement follows the release of Finland's new, five-year action plan to prevent violence against children. This action plan, which focuses on children aged 0-17, includes the implementation of the Barnahus Model throughout the country. It aims to improve the position of child victims in the current service, care and crime systems, while also taking into account children who are at risk of using – or have already used – violence. 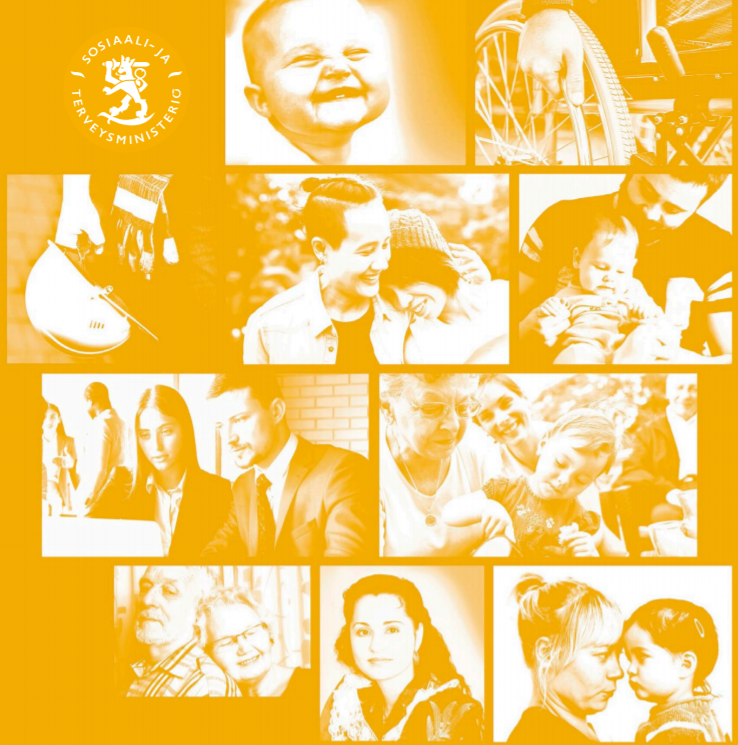 The Non-Violent Childhoods Action Plan for the Prevention of Violence against Children 2020–2025 is guided by a steering group nominated by the Finnish Institute for Health and Welfare which includes representatives from five ministries (Ministry of Social Affairs and Health, Ministry of Interior, Ministry of Justice, Ministry of Education and Culture, Ministry of Economic Affairs and Employment) and 28 other organisations.

Reducing violence in Finnish society is a national objective. The aim is to locate an effective national working model for violence prevention that comprises measures undertaken by several administrative sectors.

From 2010 to 2015, a national Action Plan on Preventing and Reducing the Use of Disciplinary Violence was implemented. The aims of the plan included reinforcing the human dignity of children, eliminating violence as a method of punishing children, and speeding up a change in attitudes towards physical punishment.

The Non-Violent Childhoods Action Plan for the Prevention of Violence against Children 2020–2025 deals with the rights of the child, inclusion, factors that protect against violence, and risk factors and their consequences. The aim is to improve the position of the child victim in the current service systems, also taking into account those children who are at risk of perpetrating violence. The plan places special emphasis on children in particularly vulnerable situations with regard to violence, as well as some topic-specific issues like honour-related violence, extremism and FGM. The plan emphasises the importance of multi-disciplinary cooperation. In 2022, a mid-term review will be carried out concerning the implementation of the action plan's objectives and actions.

A four-year Commission for Combating Violence against Women and Domestic Violence commenced work at the beginning of 2017. Operating under the Ministry of Social Affairs and Health, the Commission is responsible for the coordination, monitoring and impact assessment of the measures required for the implementation of the Istanbul Convention, and shall draw up a plan for the implementation of the Agreement, to be approved by the Council of State.

In autumn 2020, the Ministry of Justice in collaboration with several other ministries and expert organizations launched the Action Plan for Combating Violence against Women for 2020–2023. It includes the comprehensive reform of the legislation on sexual offences, the assessment memorandums on the need for separate criminalisation of honour-related violence and female genital mutilation, the review of the legislation on the restraining order, the intersectoral Action Plan against Trafficking in Human Beings, and the review of the situation of mediation and other alternative dispute resolution methods, including mediation in cases of intimate partner violence.

Finland was the second country in the world to prohibit corporal punishment against children in all settings. 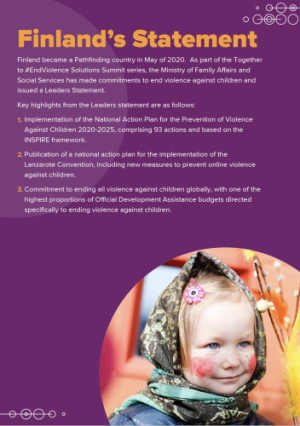 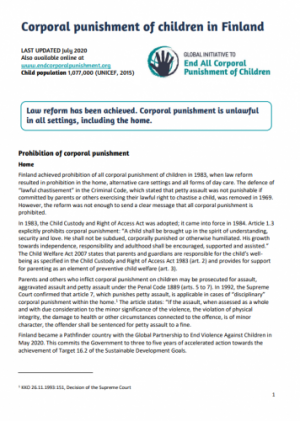 Corporal Punishment of children in Finland