Since 2014, violence has been on the rise in El Salvador. To tackle this growing issue, the government became a pathfinding country in February of 2016, committing the country to fighting violence against children in new, innovative ways.

El Salvador accepts a recommendation during the Universal Periodic Review to prohibit corporal punishment in all settings, expressing a political commitment to do so.

El Salvador launches its national policy on child protection, the Política Nacional de Protección Integral de la Niñez y la Adolescencia. This policy will be in place from 2013 to 2023.

El Salvador approves the National Action Plan of the National Policy for the Comprehensive Protection of Children and Adolescents (2014-2017). It contains programmes and indicators to prevent violence against children and adolescents, and includes the commitments of multiple state institutions.

El Salvador becomes a pathfinding country, making a formal, public commitment to comprehensive action to end all forms of violence against children.

In August, the Family Law is modified to ban child marriage without exceptions. Soon after, El Salvador drafts the National Inter-sectoral Strategy for the Prevention of Pregnancy in Adolescents (2017-2027), and launches the strategy one year later in 2018.

The High Government Representative for the Global Partnership (appointed by the Foreign Affairs Ministry) establishes a multi-stakeholder platform known as the Partnership Steering Committee.

These analyses are supplemental to each country's Violence Against Children Survey Report, nationally representative household surveys of children and young adults ages 13 to 24 years that measure the prevalence and circumstances surrounding emotional, physical, and sexual violence against males and females in childhood, adolescence, and young adulthood. The Government of El Salvador published its Violence Against Children and Youth Survey (VACS) Report in 2019. Explore the data. 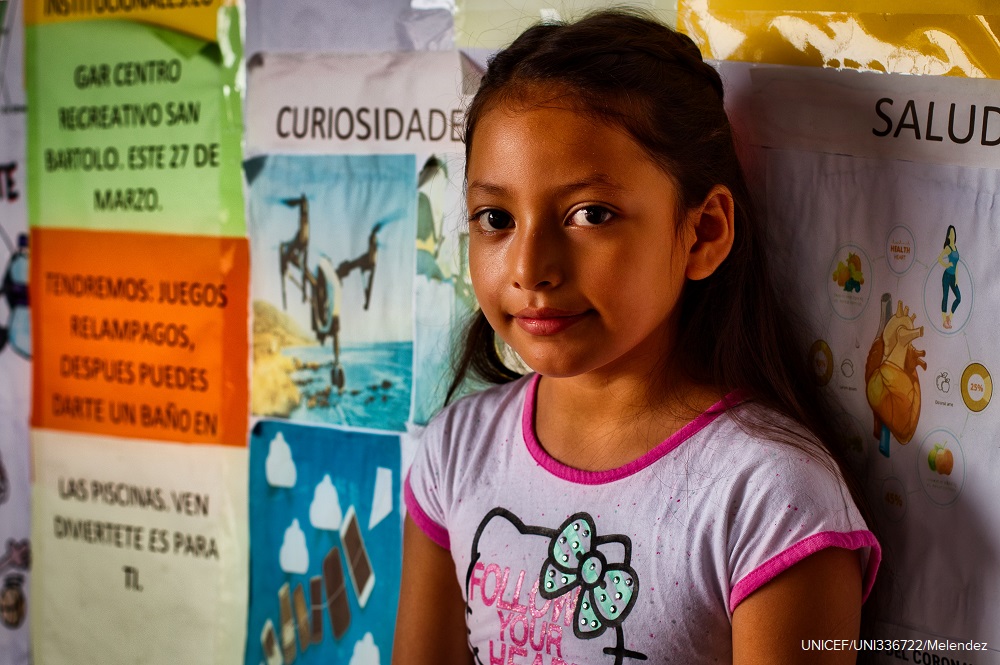 The National System for the Integral Protection of Children and Adolescents is comprised of a specialized judiciary and 16 department protection boards that investigate threats and violations of the rights of children. The system also includes the Shared Care Network, which is formed by civil society organizations that work for children and child-focused public institutions.

As a Pathfinding Country, El Salvador established a steering committee to make strategic decisions, approve documents and processes, and promote El Salvador’s commitment to ending violence against children. Several non-government organizations in El Salvador have started a "Joining Forces Process" to work toward Plan Z, an initiative that aims to establish child-led innovation labs that will empower children to brainstorm social innovations that reduce violence against children.

A technical working group was created to oversee the implementation of violence prevention activities and was strengthened in preparation for a violence against children survey to ensure that the appropriate policies and programs followed up on the results. Technical working group members are the most senior officials at the key participating ministries. Several agencies collaborated to implement the violence against children survey, including USAID, the Pan American Health Organization, Centers for Disease Control and Prevention, the United Nations Development Programme, Promundo and the Instituto Universitario de Opinión Pública of the Universidad Centroamericana José Simeón Cañas.

In 2014, a national health survey was carried out by the Ministry of Health–National Health Institute in collaboration with the General Directorate of Statistics and Censuses. This survey was part of the UNICEF Multiple Indicator Cluster Survey Programme. A new multiple indicator cluster survey with violence against children survey indicators is being developed by UNICEF and the Ministry of Health and is scheduled to launch in 2020.

In 2015, the National Council for Children and Adolescents (CONNA) created the National Child Information System. CONNA, the General Directorate of Statistics and Censuses, and UNICEF are working together to define national indicators for childhood and adolescence and to implement data interchange technologies.

In November and December 2017, data was collected for the El Salvador violence against children survey, which was led by the Ministry of Justice and Public Security with assistance from the General Directorate of Statistics and Censuses, the technical working group, and the U.S. Centers for Disease Control and Prevention. The survey was conducted as part of a Together for Girls partnership, USAID, and the International Organization for Migration.

El Salvador has a child protection coordinating mechanism at both the executive and operational levels, as established in the PNPNA. The general objective of the child protection national action plan, based on the PNPNA, is to ensure the rights of children and their families at all levels of society, with strategic objectives concerning the right to health, protection, development and participation. CONNA is the agency responsible for its implementation.

The plan uses the following INSPIRE strategies: (I) strengthening administrative and judicial response measures for children and ensuring access to justice; (S) ensuring safe family environments, including reduced access to firearms; (I) guaranteeing the protection of socioeconomically-vulnerable children; and (R) creating and strengthening mechanisms for responding to violence. The INSPIRE toolkit has been presented to the Committees, and an INSPIRE capacity development process is currently in planning stages. A roadmap and a national plan of action to end violence against children are also currently in planning stages. Both will include the participation of multiple stakeholders, including children and CSOs.

The operational structure and bodies responsible for the design and preparation of the roadmap and plan have been developed at the managerial and technical-operative levels. The methodology for the development of the national roadmap is currently being implemented. In 2018, several civil society organizations met with CONNA, state institutions, UNICEF and other stakeholders to sign a letter of understanding with the state, committing to joining efforts and working on concrete actions to eliminate all forms of violence against children. In addition, a coalition was formed to work together to support the government in adopting a process to remove child sexual abuse material from the internet. A coalition of government institutions, civil society organizations and other actors are working to draft legislation to prohibit corporal punishment of children.

Corporal punishment is prohibited in some settings. Prohibition is still to be achieved in the home, alternative care settings and daycare. 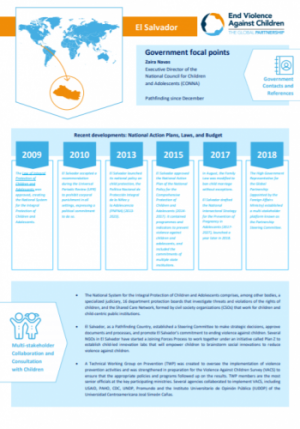 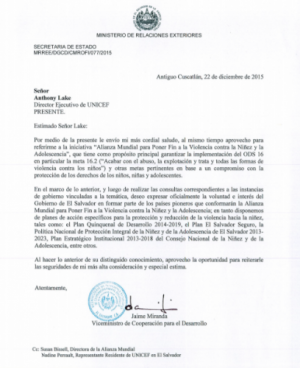 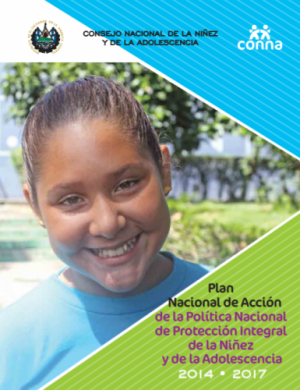 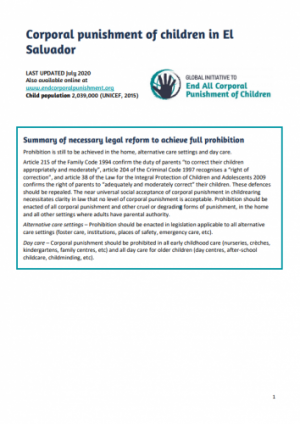 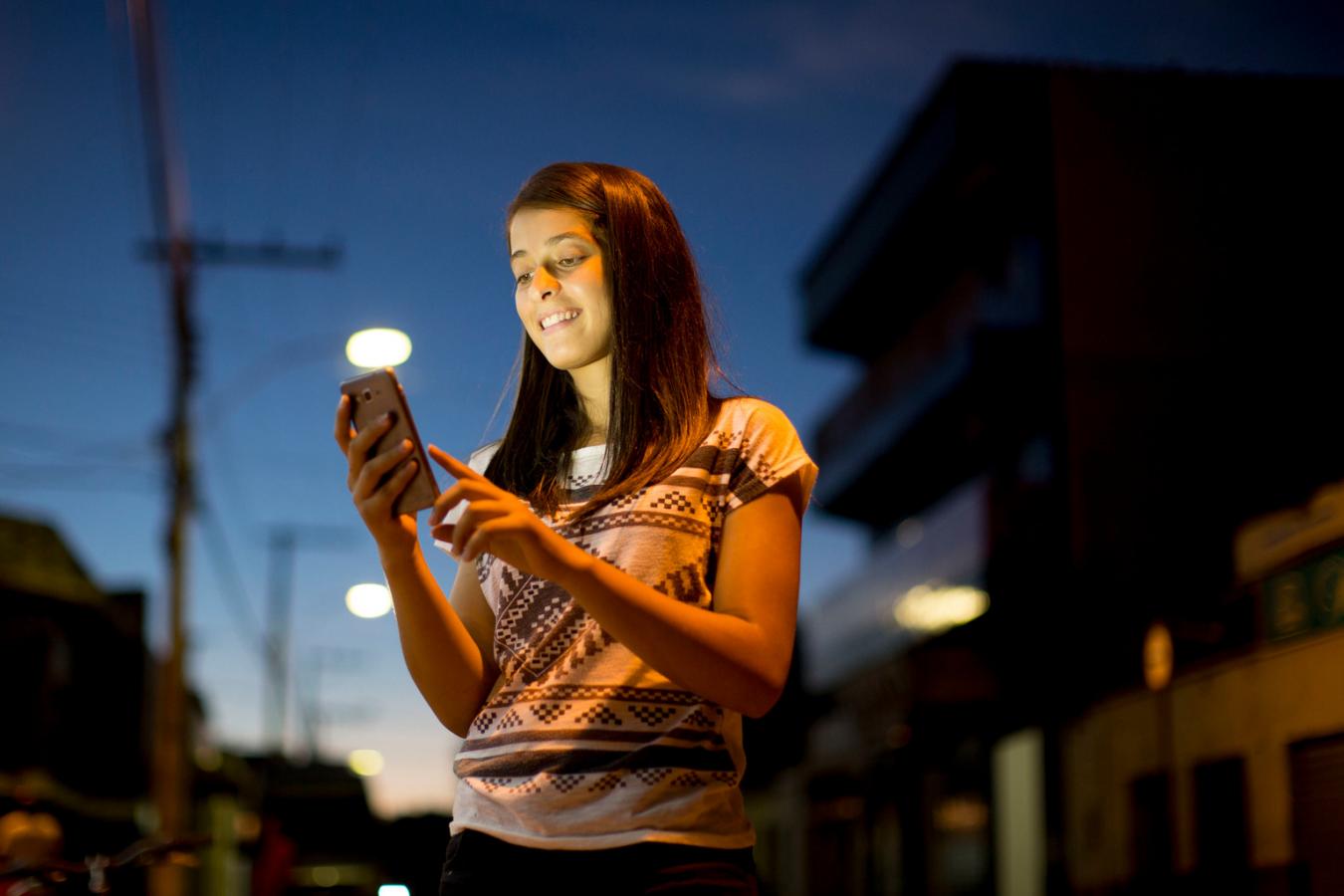 El Salvador, Guatemala and Honduras pledge to work together to protect children online