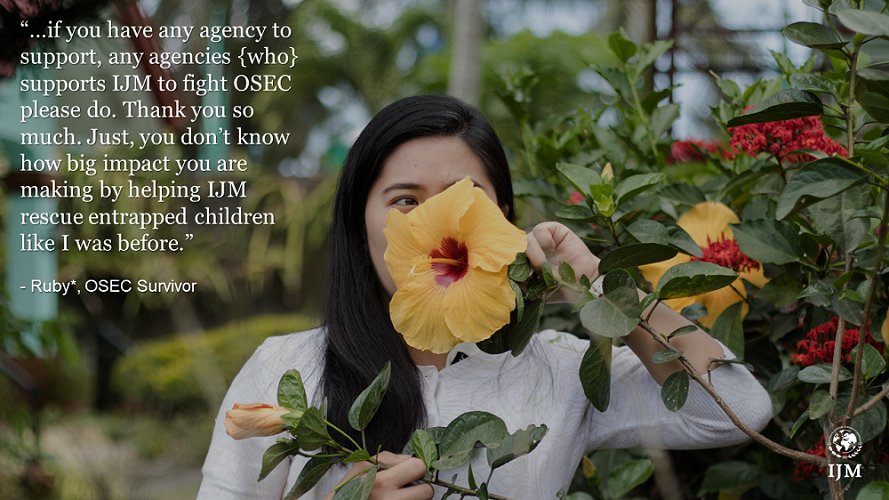 All she wanted was a chance to prove her independence.

Instead, at the age of 16, Ruby was deprived of her freedom and trapped in a cybersex den in the Philippines – forced to do whatever the customers asked her to do as they directed the live streaming of sexual abuse.

It started when Ruby received a private message on social media. She was told there was a new staff job in a computer shop 650 kilometres away, and she’d be offered free room and board while she worked there. The person asked if Ruby wanted the job – and once they told her they would even pay the travel fare to pick her up from her hometown, she jumped at the opportunity.

Almost immediately, though, Ruby realised this job was not the one she’d signed up for.

Ruby was desperate to leave but couldn’t do so until she paid off her “travel fare debt,” a sum that became more and more impossible to pay as her employers charged her for extra goods. On the one day she attempted to escape and cried out for help, a kitchen knife was brought to her throat. She almost lost her life.

"The customer tells you what to do,” Ruby said. “And if you don’t obey your customer, my trafficker would give you consequences… they would starve you; they won’t give you anything, things like that.”

Eventually, the International Justice Mission (IJM), an End Violence grantee and partner, helped Philippine authorities pinpoint Ruby’s location and rescue her, along with five other girls. After a series of court cases, the couple who ran the illegal operation was sentenced to 15 years in prison.

Though Ruby is still working to heal, today, she is free and safe. She has even forgiven her perpetrators – and prayed for them at the back of the courtroom after their conviction. Ruby has finished her degree in English Language Studies and is earning a living through her job as a customer service representative. In the future, Ruby is hoping to pursue a law degree to help other girls trapped in similar slavery schemes.

Listen to Ruby’s experiences firsthand and find out more about IJM's work.

This story was contributed by an End Violence partner and grantee, International Justice Mission, as part of the Together to #ENDviolence Solutions Summit Series.