Violence affects children in every country, community and culture across the world. Of children who experience violence, two in three do so at the hands of those who are supposed to love them the most – their caregivers – in part because as of today, 87 per cent of all children live in countries where corporal punishment is legal.

But this month, the world is coming together to push for something better.

April 30 is the International Day to End Corporal Punishment of Children, a day that draws awareness to this important issue and urges for new efforts to combat it. To mark that moment, End Violence is hosting two high-level, Together to #ENDviolence events focusing on ending corporal punishment.

The first will take place on April 30. The event will look at the progress – and delays – in the global movement to prohibit corporal punishment of children, while the second, on June 4, will examine how prohibiting corporal punishment can be put into practice. The latter event will showcase international examples of leadership and implementation, and both will include the voices of young people, governments, experts from the human rights, legal and academic fields, and practitioners from across the world.

For our 30 April event, expect to hear from speakers like H.E. Mr KIMURA Tetsuya, Ambassador of Japan to the United Nations; Dr Joan Nyanyuki, Executive Director of the African Child Policy Forum and Co-Chair End Violence Executive Committee; Mr. Adrien Taquet, Secretary of State for Children and Families, France; and many more. For more information, including the full speaker list, please click here.

In addition, End Violence is issuing a statement that calls on all governments to prohibit corporal punishment and to begin the legislative process that will protect children in all settings. We are asking everyone – from governments to organisations to individuals – to endorse this statement and accelerate progress on this critically important issue. The signatures we collect will show widespread support for the prohibition of corporal punishment, and will be an essential tool to push legislative change forward.

REGISTER FOR THE EVENTS

Prohibiting all corporal punishment of children:
Laying the foundations for non-violent childhoods 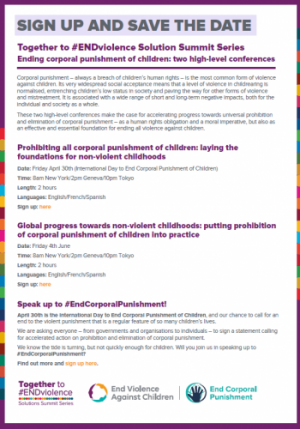 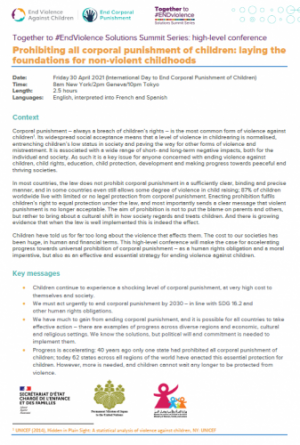