Mongolia has been a pathfinding country since 2018. Over the years, all levels of Mongolian society have contributed to the fight against violence, from citizens leading protests in the capital to civil society organizations changing laws and legislature. The End Violence Fund is also supporting UNICEF Mongolia's program to improve government services for child victims, improve helpline reporting and referrals, and more.

The government of Mongolia organizes the first annual International Spank-out Day on April 30. It includes activities for raising public awareness in targeted communities, as well as nationally broadcasted information and television programming.

A Revised Criminal Code is passed, including a chapter regulating crimes against children.

The 1996 Law on the Rights of Children is revised and the new Child Protection Law is passed. These laws now prohibit violence against children and explicitly confirm that children have a right to be protected from corporal punishment. Additionally, they strengthen child protection systems at the national and sub-national levels.

The National Programme of Action on Child Protection and Development (2017-2021) is approved by Resolution No. 270 of the Government, which includes specific goals on decreasing child poverty, increasing child-friendly social protections, and improving early childhood development rates and services across the country.

Mongolia becomes a pathfinding country in January of 2016, making a formal, public commitment to ending all forms of violence against children. US $2.4 million is allocated to the implementation of activities in the national programme on child protection.

Since 1996, the National Council for Children has acted as an oversight body to ensure and protect the rights of children. After passing the Law on the Rights of Children in May of 2018, 27 participants from different ministries and national agencies convened for the first time to discuss actions related to violence against children and children’s rights. They are expected to regularly report on progress.

In addition, the Deputy Minster of Labour and Social Protection coordinates an inter-agency child protection and development working group. The role of this working group is to ensure effective implementation of the national action plan and to implement recommendations from the United Nations Committee on the Rights of the Child.

Multi-disciplinary teams are the lowest administrative unit at the urban and rural levels in Mongolia. In accordance with the revised law on combatting domestic violence, manuals were created to help these multi-disciplinary teams address and respond to violence against children. The manuals consist of chapters for each member of the multi-disciplinary team and provide guidance on addressing and responding to violence. Each chapter is tailored to specific members, including the governor, local parliament representatives, social workers, school social workers, police officers, family doctors, welfare officers, community leaders, and representatives from non-governmental organizations.

UNICEF Mongolia is supporting integrated government services for child victims. They are improving reporting and referrals for the national violence hotline, executing a national gender-sensitive education programme, and engaging the telecommunications industry to develop solutions.

In 2017, the "Young Voices" survey was conducted with high-school students, providing strong evidence for the existence of violence against children in schools and at home. Civil society organizations used the findings of the study to advocate to the Mayor and Council of Ulaanbaatar, which represents half of Mongolia’s population, for better services for at-risk children.

A multiple indicator cluster survey was conducted in 2018, which included questions on child discipline. The results will be released in the second quarter of 2019. Several earlier versions of the multiple indicator cluster survey have also been conducted, with the most recent, MICS5, collecting data from 2013-2014. Research has found that while the number of children in residential care has dropped, more and more children are at greater risk of being exposed to abuse and exploitation online, and that a large percentage of children in Mongolia are affected by income poverty.

The National Programme of Action on Child Development and Protection (2017-2021) sets the following objectives to protect children’s rights: create child-friendly, safe environments; create an environment conducive to development of each child, so that the skills and talents of children can be identified and fostered; promote the practice of listening to and respecting the opinions of children in society and increase child participation in the planning, implementation and evaluation stages of various policies; protect children from all forms of neglect, abuse, violence, and exploitation as well as situations where they might be placed at-risk; and reduce poverty among children by promoting equal-opportunity social welfare measures.

In 2019, the government of Mongolia plans to conduct two evaluations that will analyze the implementation of the Law on Child Protection and the Law on Child Rights. These evaluations will also examine the effectiveness, efficiency and sustainability of the interventions planned within the National Programme of Action. Findings and recommendations will be available by the end of 2019 to help inform policies and practices and to further strengthen the protective environment for children.

A group of Mongolian non-governmental organizations, including the National Network for Child Protection and the National Network to Eliminate the Worst Forms of Child Labor, challenged the government’s decision to lift the ban on child jockeys racing in high-risk winter conditions. Over the year, the group’s legal actions, lobbying and media campaigns brought about widespread public support for the ban This resulted in the government reinstating it and pledging to put children’s safety before commercial exploitation.

In 2019, End Violence and our partners are working to: 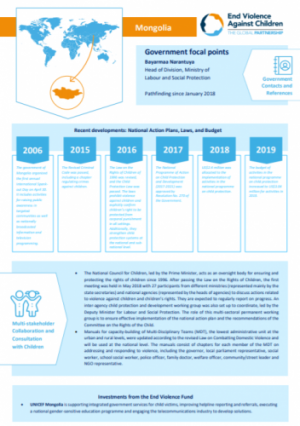 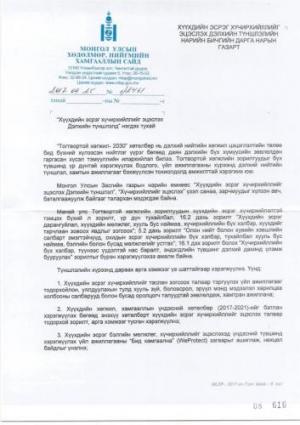 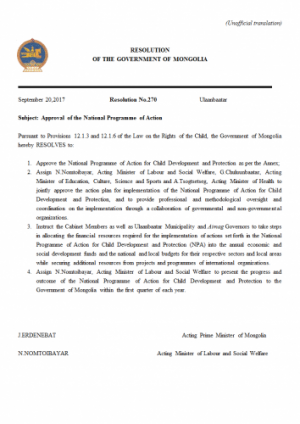 National Programme of Action for Child Development and Protection