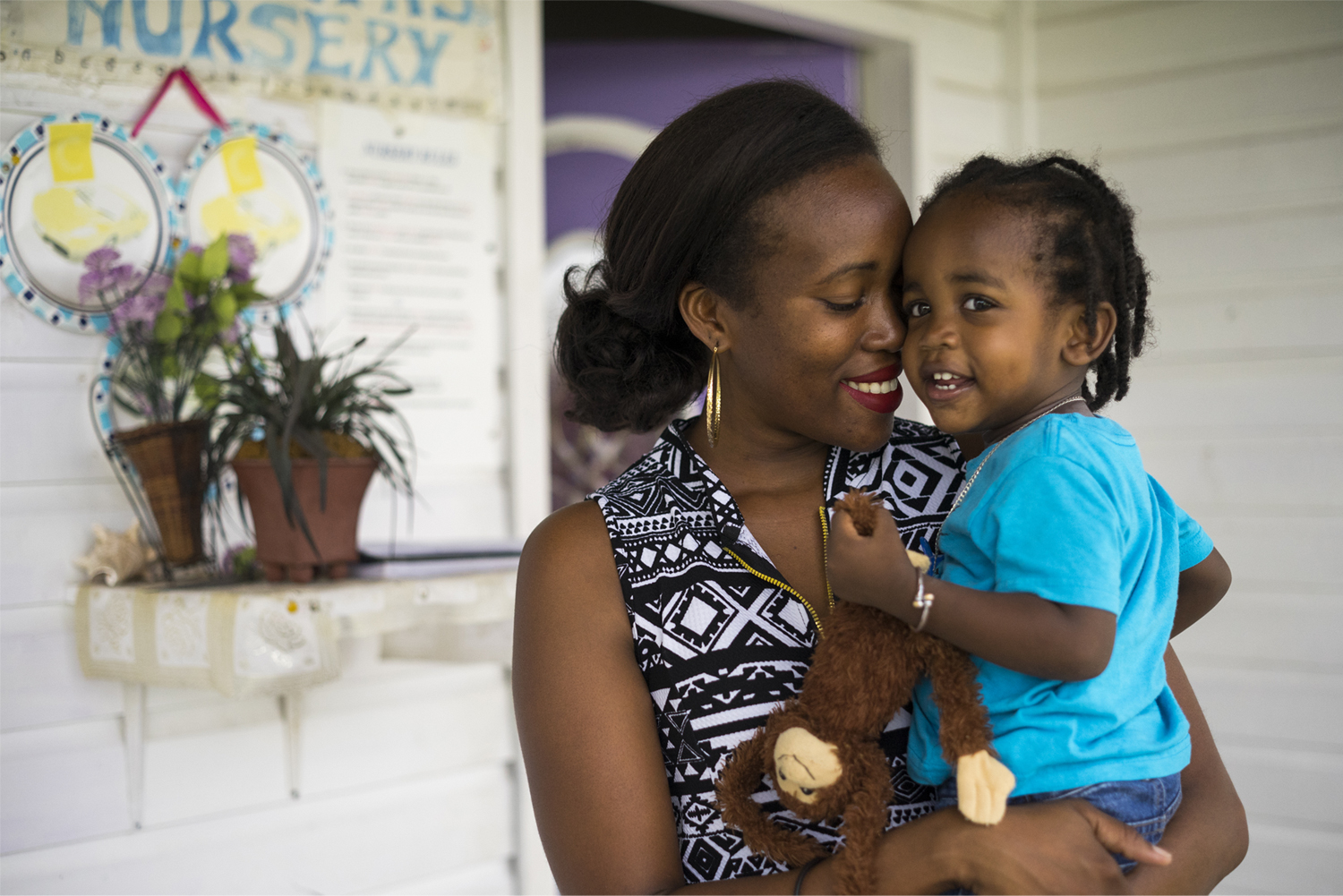 On 30 April, 437 individuals from 75 countries gathered for a Together to #ENDviolence affiliate event, Prohibiting all corporal punishment of children: laying foundations for non-violent childhoods. The event aimed to accelerate progress towards the universal prohibition of corporal punishment, and urged participants to view this elimination as an essential step toward ending violence against children, once and for all.

“We are all born free and equal,” said Ericka, an 18-year-old youth activist from the Philippines. “But the tradition of violence has been passed down from generation to generation. This needs to be stopped and redefined – right now.”

The conference, co-sponsored by the governments of Japan, France and Tunisia, featured 10 inspiring speakers, including leaders from government and the United Nations, civil society, academia, and youth activists. Each speaker explored ending corporal punishment from a different angle – but all agreed that universal prohibition must be achieved if we are to end violence for good.

“We have our task cut out ahead of us,” said Dr Joan Nyanyuki, the Executive Director of the African Child Policy Forum, Co-Chair of End Violence’s Executive Committee, and moderator of the event. "Just 62 countries have fully prohibited corporal punishment, and we need to see that number going up.”

Dr Elizabeth Gershoff, a professor at the University of Texas in the United States, dove into the research about corporal punishment and prohibition. Dr Gershoff focused on four key insights from her two decades of research into the issue, all of which support the evidence that far from improving children’s behaviour, corporal punishment actually impairs their growth, health and well-being for years to come.

Mr Tetsuya described Japan’s efforts to end corporal punishment, beginning with the country’s prohibition of the practice in June of 2019. Soon after, the government clarified the definition of corporal punishment and expanded the scope of its prohibition. Tetsuya spoke about the criticality of this decision during COVID-19, when children were kept at home – and away from the services in place to protect them – for longer than any other point in recent history.

“Japan is determined to make every effort to achieve target 16.2 of the SDGs, and to ensure security for all children,” said Tetsuya. “We will continue to work to end all forms of corporal punishment and call on other member states to join this effort.”

Mr Taquet shared similar experiences from France, which also prohibited corporal punishment in 2019. Like Japan, the country stepped up its efforts to enforce behaviour change around corporal punishment during COVID-19: the French Government translated and disseminated fact sheets, for example, to help parents manage tense situations during at-home confinement, and supported parenthood through a “primary prevention” approach.

“It is the duty of society to protect children,” said Mr Taquet. “The interest of children must take precedence over our cultural and sociological habits. This is the meaning of this type of event, which should enable us all to make progress towards the widespread abolition of cultural punishment. Let us continue, together, to join forces.”

Mme Imen Zahouani Houimel spoke about Tunisia’s experiences – and commitment – to ending corporal punishment. One of only ten African countries that have done so, Tunisia fully prohibited the practice in 2010. Ever since, the country has remained committed to this prohibition, despite various political and economic challenges.

Ms Houimel spoke about a new constitution adopted in 2014 that introduced a landmark article on children’s rights, along with a 2017 law that aimed to eliminate violence against women and children by increasing the criminal penalty for those who perpetrate such abuse. Like Japan and France, Tunisia has also stepped up its efforts throughout COVID-19, establishing a “green line” for psychological support to children and families, with 10 per cent of those calls reporting cases of child abuse.

“Ladies and gentlemen, we reaffirm our commitment to strengthening children's rights,” said Ms Houimel. “I make an urgent appeal for the fight, at all levels, against corporal punishment and all cruel, degrading and inhuman forms of abuse from parents and individuals, for these are abominable crimes before which we should all unite and act to put an end.”

During the event, a poll was conducted with participants to assess what they felt was the most critical action they would like to see their government take to address corporal punishment against children. The results are below. 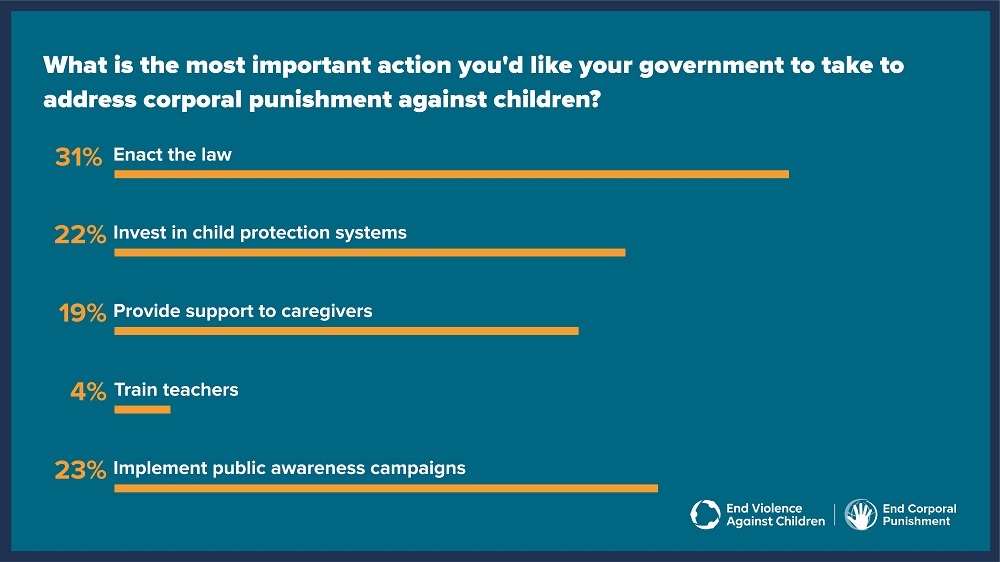 Perspectives from the United Nations

Dr Najat Maalla M’jid, the UN Special Representative of the Secretary-General on Violence Against Children; and Dr Mikiko Otani, a Member of the UN Committee on the Rights of the Child, highlighted how prohibiting corporal punishment is an essential component in accomplishing the Sustainable Development Goals and a fundamental commitment in international human rights obligations. After speaking about the vast, negative impact corporal punishment has on both children and societies, Dr M’jid emphasised the main ways of ending the practice: law reform and norm change.

By challenging corporal punishment legally, Dr M’jid said, law reform removes any grey area around whether or not violence against children is acceptable. And by tackling the norms that condone corporal punishment – and supporting caregivers in healthier, more positive parenting approaches – parents are given an option that sets boundaries for children but retains their dignity as caregivers.

“International and regional human rights standards are clear,” said Dr M’jid. “Physical and humiliating punishment is a violation of children’s rights. Their right to freedom from violence. Their right to survival and development. Their right to equal protection under the law.”

Dr Otani shared the history of those international standards, beginning with the Convention on the Rights of the Child in 1989, which sets the obligation for all states to protect children from physical and mental violence. In 2007, the Committee adopted a General Comment on corporal punishment, which provided guidance to countries on prohibiting – and enforcing the prohibition – of the practice. And in 2001, the UN proclaimed the decade of 2001 to 2010 the International Decade for a Culture of Peace and Non-Violence for the Children of the World, while in 2015, the end of violence was inscribed in the Sustainable Development Goals.

Dr Sonia Vohito, the Legal Policy Specialist at the End Violence Partnership, discussed the legal considerations in banning all corporal punishment of children. The best way to do so, Dr Vohito said, is to repeal all laws authorizing corporal punishment in all sectors – and not settling for “silent” reform, where laws allowing corporal punishment are just removed. Clarity in law is an essential violence prevention measure, because it sends a clear message about what it and isn't permitted in child-raising.

Civil society organisations play an essential role in the prohibition of corporal punishment, and are often the ones driving legal and social change on the ground. To illuminate civil society’s role in the fight against corporal punishment, Save the Children’s Lyda Guarin spoke about the movement to prohibit and eliminate violent punishment in Latin America – and the key drivers within that process. Guarin is the Senior Child Protection Advisor of Save the Children’s Latin America region.

Guarin also highlighted the urgent need for prohibition due to COVID-19. Studies in Latin America show that two of three children in the region experienced physical or psychological violence at the hands of their caregivers during the pandemic, with domestic violence increasing across communities.

Young speakers from the Philippines and Uganda spoke about the impact of corporal punishment on children not just in their countries, but across the world. They also made recommendations on how to tackle corporal punishment, and erase the pervasive perceptions that keep the practice alive.

“When I first introduced this topic to my classmates and teachers, they didn’t think it was a problem,” 18-year-old Ericka said. “But based on the Filipino Children’s Report, corporal punishment causes depression, low self-esteem, rebellion and physical and emotional damage to children and youth. If you cannot discipline an adult using violence, you should not be able to do the same to a child.”

Ericka spoke about the need to replace corporal punishment with positive discipline, and better educate communities – and parents – in more healthy styles of parenting. She also urged her government officials and legislators to pass a law that prohibits corporal punishment and promotes positive discipline, and reminded Filipino leaders about their commitments to the issue, and its inclusion within the Philippine Plan of Action to End Violence Against Children.

Ssebulime, a 17-year-old from Uganda, spoke about the context of corporal punishment in his country. Though the practice was outlawed in schools years prior, it continues to affect children in homes, schools and other communities across the world. Ssebulime also highlighted the value of positive parenting practices, and how replacing corporal punishment with such responses would change the course of children’s lives.

“My call is for all of you to step up, keep doing what you’re doing,” said Dr Nyanyuki at the event’s close. “Let’s call on our governments to do two things: Take the step to enact the laws to prohibit corporal punishment, and second, to implement the practical measures that go into enforcing this law.”